The Runaway Star That's Racing Full-Throttle Out of Our Galaxy 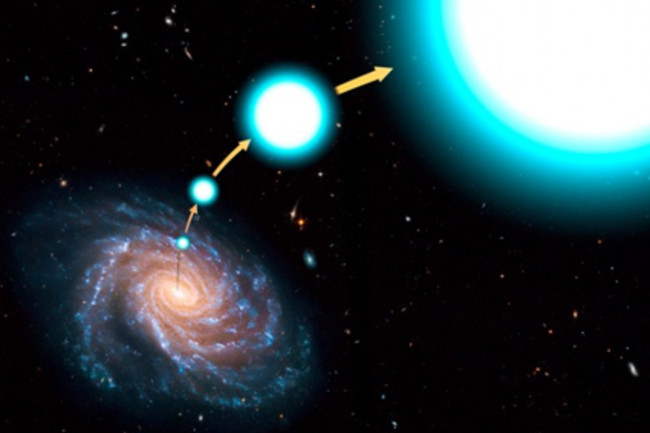 I like the Milky Way. I dare say it's my favorite galaxy, being home and all. But a blue star called HE 0437-5439 is in one big hurry to leave. The star is zooming away from the Milky Way's center at 16 million miles per hour, three times faster than our own sun glides across the galaxy. Astronomers had spotted the hasty traveler before—it's one of 16 known "hypervelocity" stars. Now, with the help of the Hubble Space Telescope, Warren Brown of the Harvard-Smithsonian Center for Astrophysics traced the path of the star back to the event that allowed it to reach such great speed: a meeting with a black hole. A hundred million years ago this star was one of three traveling together at a more sedate pace.

After the stellar smashup, the black hole flung this remaining star away. That helps explain its path and its haste, Brown says.

“The star is traveling at an absurd velocity, twice as much as it needs to escape the galaxy’s gravitational field. There is no star that travels that quickly under normal circumstances — something exotic has to happen” [Wired.com].

The conflagration also explains the star's blue appearance, which has scientists scratching their heads—it looked like it was only 20 million years old, but its long trajectory meant it had to be much older. Brown says that when the star absorbed its partner, that refreshed its appearance and made it look young again. The study

appears in The Astrophysical Journal. Related Content: DISCOVER: Amazing Images of the Heart of the Milky Way

80beats: Massive Blue Supergiant Challenges Theory of How Big a Star Can Be

80beats: Astronomer: Earth-Like Planets Are Common, But Stars Have Eaten Many

80beats: How a Massive Star Is Born