The Resurrection of Genesis

When the Genesis spacecraft crash-landed on a Utah salt flat on September 8, its grand purpose—to collect atoms that would help explain our solar system’s origin—seemed lost. Then disaster slowly gave way to a series of small triumphs. “Every time a major piece of equipment or a large fragment was pulled out, people in the clean room would cheer,” says Roger Wiens of Los Alamos National Laboratory. Scientists are now aglow with optimism that the mission may yet achieve most of its aims. 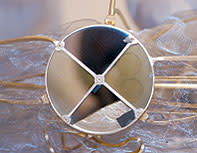 Only one quadrant of this palm-size solar wind collector from the Genesis spacecraft is cracked. Scientists expect to be able to retrieve data from all four wedges.

The accident will make a delicate analysis process even more difficult, however. Genesis spent two years intercepting charged atoms from the solar wind, the continuous flow of particles emanating from the sun. These particles indicate the precise composition of the sun and, by extension, the cloud of dust and gas from which it and all the planets coalesced some 4.6 billion years ago. The atoms embedded themselves in several types of collectors, including fragile sapphire or diamond wafers and sheets of gold foil, which were locked away in the payload that was supposed to land by parachute. Many of the collectors broke on impact; all were contaminated by everything from Utah soil to spacecraft insulation.

The recovery team is experimenting with baths of ultrapure water or acid to remove impurities. Laser probes may also be able to look through contaminants to study the solar atoms below, Wiens says. He is encouraged that the wafers designed to measure oxygen isotopes (atomic variants that have slightly different masses) in the early solar system are 85 percent intact. This experiment was Genesis’s top priority because it will help settle a debate about how each of the planets formed differently, all ending up with distinct mixtures of oxygen types. Gold foil collectors for a similar study of nitrogen isotopes also came out “looking absolutely beautiful,” Wiens says.

Genesis scientists will need years of analysis to answer their formative questions, so they are unruffled by a few extra weeks of sorting and cleaning. “I actually feel very good about this mission,” a relieved Eileen Stansbery of Johnson Space Center told a press conference. “Just having the samples is a wonderful thing.”