By studying the scars left from long-gone, violent lunar impacts, scientists have revealed new details about the history of impacts on Earth. 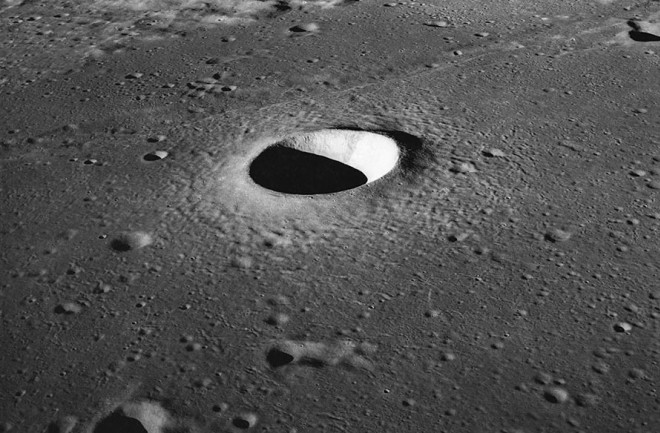 An image of the Moltke crater taken from Apollo 10. (Credit: Wikimedia Commons)

Because the moon is so close to the Earth, it’s thought that impacts there correspond to impacts and craters left on our own world. “The moon and Earth are very close neighbors. The population of impactors that would hit the moon would also hit the Earth,” study author Sara Mazrouei of the University of Toronto said in an email. “Therefore, they should have both experienced a similar history in terms of impact cratering.”

And by observing the moon’s many craters, her research team discovered that about 290 million years ago, the rate of crater-forming impacts on the moon increased dramatically. That implies that more space rocks were also striking Earth at the time.

The results also give insights into the time period before this sudden increase happened. Earth has few impact scars dating to between 300 and 650 million years ago. And researchers had assumed that our planet’s erosion processes had simply erased any evidence of these ancient craters over time. But Mazrouei and her team’s work implies erosion wasn’t to blame — there were simply fewer impacts during this earlier time.

Though erosion likely did play a role in wiping away craters that formed before 650 million years ago, her team also found.

To reach their conclusions, researchers estimated the ages of 111 young, large lunar impact craters using infrared satellite images of the moon’s surface. This let them determine the thermal properties of their material in these craters, and reveal the crater’s age.

However, the astronomers say it’s still a mystery as to why impact rates dramatically increased 290 million years ago.

“An idea is that it is due to a breakup in an asteroid family,”Mazrouei said. “When asteroid families break up, they leave the asteroid belt and head toward the inner solar System. We see their footprints as craters on the moon and Earth.”

The study was published in the journal Science.