The "Pillars of Creation" Have Been, Are Being, and Will Be Destroyed

They're part of the Eagle Nebula, and they're one of the most iconic images ever taken by the Hubble telescope. 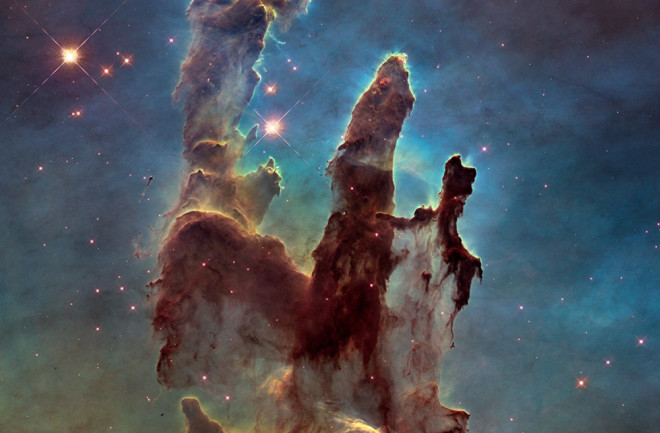 The “Pillars of Creation,” a photograph of part of the Eagle Nebula, is one of the most iconic images ever taken by the Hubble telescope. Yesterday, astronomers released a bigger, better, sharper version of the pillars, taken almost two decades after the first.

But an ironic twist — and what we didn’t know twenty years ago — is that the Pillars might have been long ago torn apart by a distant explosion. The photos we snap of them today are high-tech and modern but their subject is clouded by thousands of light-years of remove. Like the post-mortem photography of the Victorian era, the resulting images are lifelike, and beautiful, and sad.

The Eagle Nebula is an attractive cloud of gas. This gas groups itself together, becoming denser and denser until it clumps into spherical objects that turn hydrogen into helium. We like to call them stars. But as these stars grow up, they irradiate the region with ultraviolet light.

A gang of these young stars lives just above the Pillars. Their UV radiation bakes the beautiful gas and strips its electrons away. Their winds, made of high-energy particles, slam into the Pillars. And like a sandstorm battering a building, this process erodes the edges. Someday, there will be nothing left to erode. Even the ruins will be gone.

It’s tragic. A nebula births and nurtures stars. Then stars turn around and demolish the nebula, steadily deforming it as they wear it down and down and down. The nebula will die, and the stars will beat on.

But then the stars will die, exploding into new nebulae, inside of which new stars will gestate, which will then turn around and demolish the nebulae. This is what it means to be a universe.

Back to the Future

But the Pillars may be gone already, and not just because of young, ungrateful stars. Around 6,000 years ago, a blast wave from a nearby supernova likely crashed into them, grinding them down and washing them away in concert with the young stars.

But we won’t be able to watch them dim and disappear until the year 3015 (give or take).

You see, the Pillars live 7,000 light-years away from Earth. The light we see from them — the light that Hubble Space Telescope scientists used to make the new image — departed from the nebula in the year 4985 B.C.E., traveled at the speed of light toward us, and arrived here 7,000 years later. We thus see the nebula as it looked 7,000 years ago.

And 7,000 years ago, the Pillars were fine. But images taken by the Spitzer Space Telescope, and released in 2007, appear to show their imminent demise. Almost off-screen, a wavefront from a supernova explosion is stopped in still-frame, screaming along a path straight toward the Pillars. The image is like a horror movie scene in which the protagonist doesn’t know the killer is in the house, but you do. “He’s right behind you!” you yell at the screen. But it doesn’t do any good.

Based on the blast wave’s speed, it crashed into the Pillars, perhaps toppling them, around 6,000 years ago. The Pillars of Creation, which we continue to swoon over, might not even exist anymore.

We won’t know how much damage was done until 1,000 years from now, when the light from the crash finally reaches us.

Trapped Alone in the Present

There is no way for us to see what the Pillars of Creation — or anything in the universe — look like now. We see galaxies 3 billion light-years away as they looked 3 billion years ago. We see the Sun as it looked 8.5 minutes ago. If you were standing one foot in front of me, I would see you as you looked 1.01670336 nanoseconds ago, which is the time it would take for the light to reflect from your face to my pupil. While our brains live in their present, we see everything else in its past tense.

In the case of the Pillars of Creation, then, we’re lucky to have caught in this part of its history. These are good years, the kind whose photo albums you want to page through. But even the brand-new additions are faded with age.