The physics of rug wrinkles. 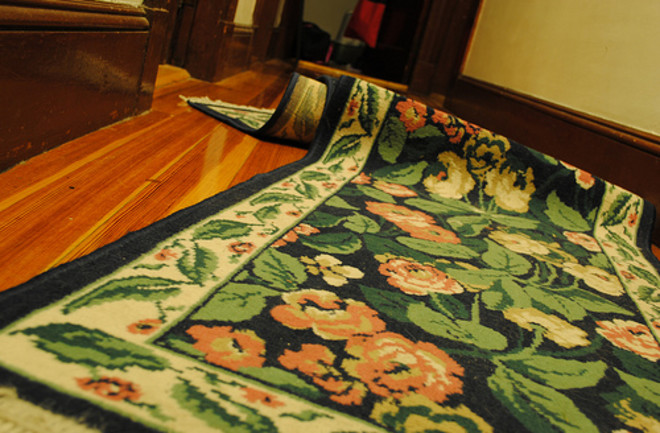 Photo: flickr/Lizard10979Sometimes it's the things we see everyday that we don't even realize have gone unexplained for millennia. Take rugs, for example. We trip over cat-induced rug wrinkles on a daily basis, but what physical parameters control their formation? What is the most energy-efficient way to remove them? Even though the movement of so-called "rug rucks" are similar to other important phenomena, such as ground movements during earthquakes, we still don't know that much about them. Fortunately, studies like this one are paving the way.Statics and inertial dynamics of a ruck in a rug "We consider the familiar problem of a bump, or ruck, in a rug. Under lateral compression, a rug bends to form a ruck--a localized region in which it is no longer in contact with the floor. We show that when the external force that created the ruck is removed, the ruck flattens out unless the initial compression is greater than a critical value, which we determine. We also study the inertial motion of a ruck that is generated when one end of the rug is moved rapidly. We show that the equations of motion admit a traveling ruck solution for which a linear combination of the tension and kinetic energy is determined by the ruck size. We confirm these findings experimentally. We end by discussing the potential implications of our work for the analogous propagation of localized slip pulses in the sliding of two bodies in contact."

Related content: Discoblog: NCBI ROFL: Your rug is so ugly it makes me sick. Literally.

Discoblog: NCBI ROFL: Why some women look young for their age.

Discoblog: NCBI ROFL: Churchgoing may be hazardous to your health.