The Origins of Panic 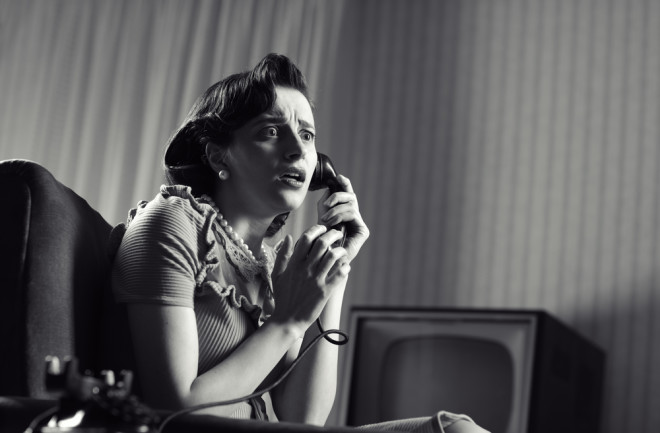 Any halfway decent thesaurus will provide a long list of synonyms for fear, and yet they are not very good substitutes. No one would confuse having the creeps with being terrified. It is strange that we have so many words for fear, when fear is such a unitary, primal feeling. Perhaps all those synonyms are just linguistic inventions. Perhaps, if we looked inside our brains, we would just find plain old fear.

That is certainly how things seemed in the early 1900s, when scientists began studying how we come to be scared of things. They built on Ivan Pavlov’s classic experiments on dogs, in which Pavlov would ring a bell before giving his dogs food. Eventually they learned to associate the bell with food and began to salivate in anticipation. Psychologists set up experiments to see if the same kind of learning could instill fear as well. The implicit assumption was that fear, like hunger, was a simple provoked response.

In one of the most famous (and infamous) of these experiments, American psychologist John Watson decided to see if he could teach an 11-month-old baby named Albert to become scared of arbitrary things. He presented Albert with a rat, and every time the baby reached out to touch it, Watson hit a steel bar with a hammer, producing a horrendous clang. After several rounds with the rat and the bar, Watson then brought out the rat on its own. “The instant the rat was shown, the baby began to cry,” Watson wrote in a 1920 report. “Almost instantly he turned sharply to the left, fell over on his left side, raised himself on all fours and began to crawl away so rapidly that he was caught with difficulty before reaching the edge of the table.”

The “little Albert” study, besides being cruel, was badly designed. Watson did not control it carefully to rule out a wide range of possible interpretations. In later decades, other scientists got much more rigorous in their study of fear, in many cases turning to rats rather than people as their test subjects. In a typical experiment, a rat was placed in a cage with a light. At first the light came on a few times so the animal could get accustomed to it. Later the scientists would turn on the light and then give the rats a little electric shock. After a few rounds, the rats would respond fearfully to the light, even if no shock came.

Further research revealed that the amygdala—an almond-shaped cluster of neurons deep within the brain—plays a pivotal role in the fear-association response in rats. Brain researchers discovered that the amygdala orchestrates human fear as well. The sight of a loaded gun, for example, triggers activity in this part of the brain. People with an injured amygdala have dampened emotional responses and so do not learn to fear new things through association. Science had identified a nexus of fear, it seemed.

Although this line of research yielded some major insights, it had an obvious shortcoming. In the real world, rats don’t spend their lives in cages waiting for lights to turn on; these experiments don’t capture the complex role that fear plays in a wild rat’s life.

Caroline and Robert Blanchard, working together at the University of Hawaii in the 1980s, carried out a pioneering study on the natural history of fear. They put wild rats in cages and then brought cats gradually closer to them. At each stage, they carefully observed how the rats reacted. The Blanchards found that the rats responded to each kind of threat with a distinct set of behaviors.

The first kind of behavior is a reaction to a potential threat, in which a predator isn’t visible but there is good reason to worry that it might be nearby. A rat might walk into a meadow that looks free of predators, for example, but that reeks of fresh cat urine. In such a case, a rat will generally explore the meadow cautiously, assessing the risk of staying there. A second, more concrete type of threat arises if a rat spots a cat at the other side of the meadow. The rat will freeze and then make a choice about what to do next. It may slink away, or it may remain immobile in hopes that the cat will eventually wander away without noticing it. Finally, the most active threat: The cat glances over, notices something, and walks toward the rat to investigate. At this point, the rat will flee if it has an escape route. If the cat gets close, the rat will choose either to fight or to run for its life.

Dean Mobbs, a neuroscientist at the Medical Research Council in Cambridge, England, wondered if humans have similarly layered fear responses. He and his colleagues were not about to send people into tiger-infested meadows, so they designed a clever alternative: They programmed a survival-themed video game that subjects could play while lying in an fMRI scanner. The game is similar to Pac-Man. You see yourself as a triangle in a maze and press keys to maneuver through it. At some point a circle appears. This is a virtual predator being guided by an artificial intelligence program to seek you out. If the predator captures you, you receive a small electric shock on the back of your hand.

This deceptively minimalist predator-prey game triggers some remarkably intense feelings. Mobbs measured the skin conductance of his players by rigging them up to a device similar to a lie detector. He found that when the predator was bearing down on players, they often experienced the same changes to their skin as those seen in people having panic attacks. Mobbs unleashed two kinds of predators on his players, a less adept one that was easy to escape, and a smarter one that was more likely to capture its victim. When people were chased by the better predator, they showed a stronger panic response in their skin, and they also crashed into the walls of the maze more often.

Meanwhile, striking changes were happening inside the brains of the players. The predators would first appear on the far side of the maze. While they remained at a distance, the same brain regions tended to become active in the players, a network that included parts of the amygdala as well as some other structures in the front of the brain. But when the predator was closing in, those brain regions shut down and a network of previously quiet regions farther back in the midbrain became active.

In 2010 Mobbs and his colleagues observed the same switch to the midbrain in experimental volunteers who watched a video of a tarantula they believed was approaching their feet. When the spider appeared to retreat, the volunteers relaxed. Some parts of the fear response depended more on the direction of the spider’s travel than its proximity to the volunteer.

Mobbs’s results mesh nicely not only with the work of the Blanchards but also with some other, more recent studies of rat neurology. For example, one of the midbrain regions that Mobbs and his colleagues observed becoming active in humans when a virtual predator (or a tarantula) was close is an area called the periaqueductal gray region. In the predator-prey game, this area showed higher activity in the people who crashed into the walls more often, providing further evidence that it plays an important role in panic. Researchers have explored the anatomy of fear more directly in rats; by manipulating different areas of the rat brain, they are able to alter parts of the standard fear-driven sequence of behavior. When neuroscientists put electrodes into the periaqueductal gray region of rat brains and stimulated the neurons there, the creatures immediately started to run and jump uncontrollably.

Fear, the new results suggest, is not a single thing after all. Rather, it is a complex, ever-changing strategy mammal brains deploy in order to cope with danger. When a predator is off in the distance, its prey—whether rat or human—powers up a forebrain network. The network primes the body, raising the heartbeat and preparing it for fast action. At the same time, the forebrain network sharpens the brain’s attention to the outside world, evaluating threats, monitoring subtle changes, and running through possible responses. Another important job it performs is keeping the midbrain network shut down so that, instead of fleeing at top speed, a prey animal keeps very still at first. As the predator gets closer, however, the forebrain’s grip on the midbrain loosens. Now the midbrain becomes active, orchestrating a powerful, quick response: fight or flight. At the same time it shuts down the slower, more deliberative forebrain. This is no time for thinking.

It may be unsettling to find that our brains work so much like a rat’s. But the amygdala and the periaqueductal gray are ancient parts of the brain, dating back hundreds of millions of years. Our small hominid ancestors probably faced the same kinds of threats that baboons do today from leopards, eagles, and other predators. Even after we evolved the ability to use weapons and became predators ourselves, this ancient brain circuit still offered a useful defense against members of our own species.

Unfortunately, our exquisitely sophisticated brains may make this predator-defense circuit vulnerable to misfiring. Instead of monitoring just the threats right in front of us, we can also imagine threats that do not exist. Feeding this imagination into the early-warning system may lead to crippling chronic anxiety. In other cases, people may not be able to keep their periaqueductal gray and other midbrain regions under control. As we perceive predators getting closer, our brains normally make the switch from the forebrain to the midbrain regions. People who suffer panic disorders may misjudge threats, seeing them as far more imminent than they really are.

To test these possibilities, Mobbs and his colleagues are planning to study people who suffer from fear-related disorders as they play the predator game. Such work may not uncover a biological distinction between angst and the heebie-jeebies, but it may show how much better we can understand ourselves—and tame our inner demons—once we appreciate the many dimensions of fear.