The new Doctor Who!

HUGE DOCTOR WHO NEWS! Need I say it?

I'm not screwing around here. If you like the show, but are clueless over what's coming up, then go away. Anywhere but here. Really, even go read PZ's blog. That's how serious I am.

OK, we clear here? Good. David Tennant is leaving Doctor Who at the end of Series/Season 5. As with every time this has happened, the Doctor (we assume) will regenerate, and be played by a new actor. And that new actor is... 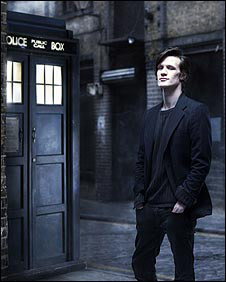 Yeah, the obvious joke is, who? I've never heard of him (not too surprising, as UK actors are relatively unknown in the US). He's done a handful of British TV shows, but that's about all we have on him. However, Smith will be the youngest man to play The Doctor in the show's history; he was born in 1982, making him a solid eleven years younger than Tennant! That should make some waves. Heck, that makes him a month younger than Billie Piper, who played Rose. I wonder what they'll do for a companion then? Someone older would make for some very funny scenes; they could play off the idea that the companion can't get over the fact that this young kid is actually a brilliant hero. Since The Doctor sometimes uses the alias of John Smith, that'll provide some inside jokes as well. 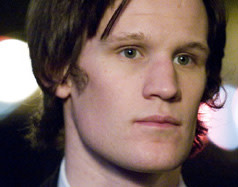 So, officially, I have no opinion on this guy. But then, I didn't know Eccleston or Tennant either. Being a skeptic and all, I will simply wait and see what happens when the first new Who with Smith airs in 2010. Until then, we have a handful more special episodes with Tennant, and then, as they show, the show must go on. Allons-y! UPDATE: Someone got some footage of the interview with Matt Smith onto YouTube. The BBC may take it down, so watch while you can.

Special thanks to all my Twitter followers who supplied me with up-to-the-moment info!

^* OK, look. I know that some Doctor Who fans are avoiding spoilers, and I've done my best to make it easy for people to avoid them. But honestly, if you didn't know David Tennant is leaving the show at the end of the limited run of Series/Season 5, then I can no longer help you! It's been common knowledge now for a couple of months, so I can't consider it a spoiler.