The neglected regionalism of these United States 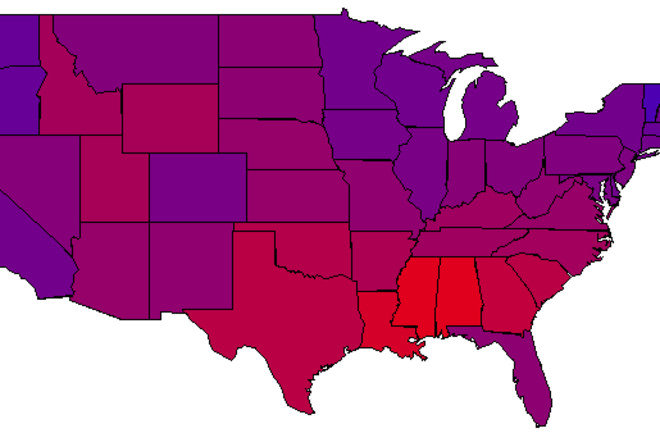 Non-Hispanic White vote for John McCain 2008 according to National Exit PollsRed = 100% for McCainBlue = 100% for Obama As we come up to the day celebrating American independence from the Britain there will be the standard revelries and reflections. Personally, I have no problem with that. A modicum of patriotism seems healthy in all, and if appropriately channeled a surfeit is often useful in the populace as a way to maintain civic engagement. That being said I did admit that in the positive and descriptive sense I am far more ambivalent about the consequences and rationale for the rebellion than I was as a child. I don't accept that the American revolution was indisputably about Virginia gentry who wished to avoid financial ruin, New England fundamentalists yearning for oppression of Quebecois Catholics, or upcountry Scots-Irish chafing at the bit to explode into the western hinterlands, heretofore restrained by the Empire. But I believe that this narrative is as true as the story I was told as a child about an unjust and oppressive British monarchy battling the cause for the cause of freedom and liberty. When Patrick Henry declared 'Give me liberty, or give me death!', it was not a universal declaration. It was implicitly a call to arms for the rights of white male property holders in the context of colonial Virginia. This is not a palatable message for elementary school age children, so such subtle but true details are neglected in the standard narrative.

. Rather, looking at the comments below I think it is time to reemphasize that American history needs to be thought of in plural terms. There was no one American revolution, but American revolutions. Without acknowledging this reality a plausible representation of the past can not be constructed. Our comprehension is limited by the tendency to back project a relatively homogeneous and unitary contemporary cultural and political union back two centuries. But to understand the disparate revolutions one must understand the disparate Americas. In 2013 when we talk about "many Americas" we often conceive of it in coarse racial or regional terms. There is a "black America" and a "white America." There is the South and the North. With the emphasis on racial identity politics, and to a lesser extent class, in elite discourse the deeper strands of historical difference rooted in the foundations of the original American colonies have been hidden from us. These older filaments of identity are outlined in historical works such as David Hackett Fischer's Albion's Seed: Four British Folkways in the America and Kevin Phillips' The Cousins' Wars: Religion, Politics, Civil Warfare, And The Triumph Of Anglo-America. A true typology of socio-cultural difference is essential toward understanding how and why the past unfolded as it did, but they are also illuminating in relation to patterns of the present.

For example, Colin Woodward's American Nations: A History of the Eleven Rival Regional Cultures of North America is a contemporary updating of the standard geographic typology. The map I generated above from exit poll data outlines broadly a major consequence of the past and present fissures of the American nationality: white Americans tend to vote very differently. In the Deep South to a good approximation to be white is to be a Republican, and vote for Republicans. In contrast, in Greater New England there is a slight tilt toward the Democratic party among white voters. When you aggregate white voters nationally there is a tendency for it to lean toward the Republican party, but this masks deep regionalism. In Vermont 31% of whites voted for John McCain in 2008. In Alabama that figure was 88%.

And so it has always been. In the 1856 election the Republicans contested for the presidency, and as you can see on the map to the left only the Yankee regions supported their candidate. The waxing and waning of political power of the various American parties over time has to a large extent been the function of shifting alliances between distinct "sections" of the American nation. In the period before the Civil War Greater New England was isolated by an alliance between the South and portions of the Lower North bound together by culture and economics. Illinois, Indiana, and Ohio, might have notionally been Midwestern Northern states, but they were divided between "Yankee" and "Butternut" (from the Upper South) cultural zones. It was from the Butternut regions of these border states where much of the anti-war sentiment in the North was localized during the Civil War. In contrast New York City may not have been settled from the South, but its cosmopolitan mercantile elite had long had a tense relationship with the New Englanders who had begun to dominate much of upstate New York and had pushed into Long Island as well as elements of Manhattan society. On top of that the port of New York had a relatively close economic relationship with the South. In other words, to understand the true texture of regional alliances and dynamics one must be cognizant of both deep historical contingencies rooted in cultural affinity, and, the exigencies of contemporary economic needs. It is difficult for me to believe that New England's ultimately successful challenge of Southern political hegemony leading up to 1860 was not bound up in its economic dynamism, which began to tear apart the north-south connections which tied states such as Pennsylvania with the Upper South, and replaced them with east-west lines of transport and communication via rail, canal, and telegraphy. Similarly, the rise of the "Sunbelt" in the 20th century was contingent upon technological and medical revolutions which closed the quality of life chasm between North and South. All this is not to deny a common American sense of nationhood which has evolved since the tenuous links of the days of the Articles of Confederation. But regionalism, which has both a physical and temporal aspect, is neglected at one's peril in terms of understanding the political and social patterns of the American republic. There are two ways in which regionalism was often transcended. One was via class, as populists attempted to overcome ethnic and regional divisions against robber barons and bourbons alike. But another was race. The 1830s saw the rise of a Democratic hegemony in national politics, based in the South and its Butternut Diaspora, but with northern auxiliaries of immigrant white ethnics in large cities (German Catholics and the Irish) and the non-Yankee zones of settlement in Pennsylvania and New York. The Democratic party in this period was simultaneously both populist and racialist, expanding voting rights to all white males, but in some cases explicitly barring blacks in Northern states from the right to vote (as opposed to the implicit bar via property qualifications). The modern American cultural consensus which speaks of a white America and black America is in some ways a morally inverted resurrection of this concept, where whites are viewed as a homogeneous whole to a rough and ready approximation.

A WASPCredit: Matthew Hutchins The problem with this view is that it is both wrong on a descriptive and moral sense. It is wrong descriptively because where black Americans have a dominant coherent national culture with ultimate roots in the South (though there have long been Northern black communities, these populations have been reshaped by the Great Migration out of the South), whites do not. To put it plainly, a privileged White Anglo-Saxon Protestant born in an upper middle class family in the northern shore suburbs of Boston is fundamentally different from a White Anglo-Saxon Protestant born in a working class family in rural West Virginia. And it is unjust because a uniformity and interchangeability of all white Americans neglects the reality that the privileged accrued to the former are not accrued to the latter. In the end what is true of whites is also true of non-whites. It seems blind to assume that a demographically expansive "Hispanic" population will remain as politically and socially homogeneous as black Americans, because of their original regional and cultural diversity (e.g., Texas Hispanics and California Latinos have long had distinct subcultures). Of course don't tell this to the standard press and pundit class, who remain wedded to cartoonish cultural and historical algebras.