The Naked Sun — Where Have All Its Spots Gone? 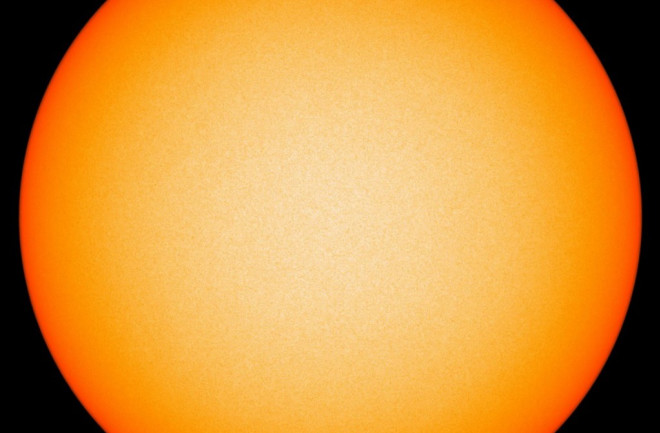 The Sun recently decided to go naked for awhile, as is evident from this image acquired by NASA's Solar Dynamics Observatory. It lost its spots. The image is from a video posted by NASA showing the Sun going naked from Jan. 26th to Jan. 30th, when a very small, lonely spot finally turns up. In fact, NASA says that with the exception of this one spot, the Sun was naked for almost two weeks.

Spotless periods like this are common as the Sun approaches the low point in its 11-year solar cycle. We're headed for that minimum next year. By contrast, during the peak of a solar cycle, the Sun is freckled with many spots. These crackle with intense magnetic activity producing flashes of x-rays and extreme ultraviolet radiation that can bathe the Earth.

The freckled Sun, with many sunspots during the peak of the solar cycle, is seen to the left. Compare that to the naked Sun with no sunspots on the right. This occurs as activity fades toward solar minimum. (Credit: ScienceAtNASA)
When sunspot numbers are high during the peak of a solar cycle, the surface crackles with activity, as seen on the left. By contrast, all is relatively calm when the Sun is headed for solar minimum, as seen on the right. (Credit: ScienceAtNASA)

Solar flares often are accompanied by explosions, called coronal mass ejections, that fling gargantuan quantities of energetic particles out into space. Earth can be bombarded by these CME particles, producing a storm in the magnetic bubble that surrounds the planet. This yields beautiful auroras but also potentially damaging effects on satellites, communication systems and power grids.

The Sun reached a peak in this activity in 2014, albeit a weak one. It was, in fact, the weakest maximum in solar activity since 1906. We've been sliding toward solar minimum since then, with sunspots and activity subsiding. The low point in the cycle is expected occur in 2019 to 2020.

From a high in 2014, solar activity, as measured by sunspot numbers, has been declining and is predicted to bottom out in 2019 to 2020. This is part of a roughly 11-year cycle of solar activity. (Credit: ScienceAtNASA)

But just because the Sun is relatively calm, and often goes naked, doesn't mean that it is in hibernation. The Sun is still active, just in a different way. For example, during solar minimum the Sun often develops vast dark areas in its atmosphere, called coronal holes, where its magnetic field opens out into space. This allows particles to speed outward, forming an enhanced solar wind. When the wind hits the Earth's geomagnetic field, the results can be similar to coronal mass ejections.

Read more: A new "hole" in the Sun's atmosphere has sparked stunning displays of the northern lights here on Earth

A view of the Sun acquired by NASA's Solar Dynamics Observatory on Feb. 6, 2018. (Credit: NASA SDO)

As I'm writing this on Feb. 6, 2018, the Sun is sporting two of these gigantic coronal holes, one in the north and the other in the south. You can see them in the form of two very dark areas in this image captured by the SDO spacecraft today.

In addition to those coronal holes, there's also a bit of crackling activity on the surface. Look for two relatively bright areas to the left in the image above. These show that even activity fades, it doesn't necessarily go away completely. In fact, on January 22nd, the Sun let loose with a solar flare and coronal mass ejection that caused beautiful auroras here on Earth a couple of days later. I just happened to see them while I was above the Arctic Circle in Tromsø, Norway covering the Arctic Frontiers conference. And I've got pictures. Stay tuned for a post about that.