The Moon Once Had An Atmosphere? 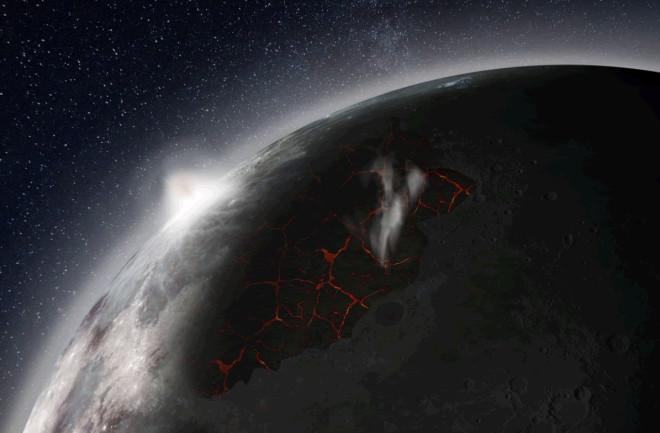 An artist's conception of the ancient moon with lava venting gases into a thin atmosphere. (Credit: NASA MSFC) Barren and desolate today, our moon was once swathed by a thin atmosphere. Born from geothermal eruptions when the moon was still young, gaseous traces of carbon monoxide, sulfur, hydrogen and oxygen once swirled across the moon's surface, say researchers from NASA. The atmosphere would have persisted for about 70 million years, they estimate, and existed three to four billion years ago, soon after our rocky companion was formed. The new findings, published in Earth and Planetary Science Letters, come from analyses of large lava flows on the moon's surface called maria, paired with samples of moon rocks from the Apollo missions. This gave the researchers an idea of what kind of volatile gasses would have been escaping from the lava, and examining the volume of the lava flows indicated how much would have been present. Given the amount of solidified lava present, they estimate that the atmosphere would have exerted at its maximum a pressure of around 1 kilopascal, or around 50 percent higher than Mars' atmosphere today. That's still thin compared to the Earth, however, at sea level the pressure is just over 100 kilopascals. Over time, the moon's weak gravity was unable to hold on to the gases, and they were lost to space. It's not totally accurate to say the moon has no atmosphere today, as there are scarce traces of gas flying around, created as photons and particles from the solar wind impact rocks on the surface, as well as from meteor impacts. But don't expect to feel the caress of the lunar wind, as its atmosphere is roughly equivalent to what's found near the International Space Station in orbit around the Earth. The Apollo 17 mission captured some of these particles, and found helium and argon, as well as potential traces of other elements on the moon. Even the ancient atmosphere was far too thin for anything to survive there, but the researchers say traces of those gassier days may remain at the moon's poles. In permanently shadowed regions there, water ice could exist, locked in place for billions of years following its emergence from beneath the moon's surface. Such reserves could be an important resource for future astronauts or inhabitants on the moon. The atmosphere could have also fueled chemical reactions with the surface rocks, offering an explanation for the presence of magnetite in lunar rocks brought back to Earth, a mineral that requires concentrations of oxygen not normally found on the moon.