The Moon Makes a Splash

Thanks to new-and-improved imaging, the Earth's nearest neighbor is looking a lot more interesting. 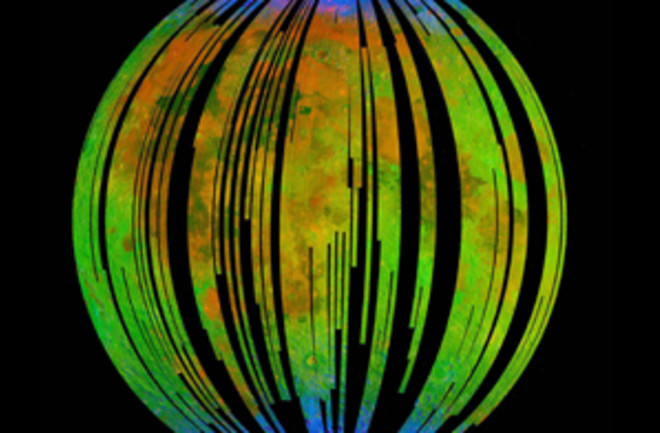 Forty years after the Apollo 11 landing, lunar science is again taking the world by storm, upending long-held assumptions about our nearest heavenly neighbor.

One of the most significant developments is the detection of water on the moon’s surface, previously thought to be bone-dry. NASA’s Deep Impact and Cassini missions, along with India’s lunar probe Chandrayaan-1, examined how the sun’s infrared rays reflect off the moon and detected the telltale fingerprints of water molecules. “We weren’t expecting to see this water signature, so we wondered, is something wrong with our instrument?” says University of Maryland astronomer Jessica Sunshine, deputy principal investigator on Deep Impact’s moon study. “But with three instruments saying the same thing, it’s unequivocal.”

The amount of water is probably small—about an eyedropperful for every two liters’ worth of lunar surface material—but finding any moisture at all is a major surprise. The water may form when the solar wind, a stream of particles from the sun, reacts with oxygen in lunar minerals. Intriguingly, the amount of water varies throughout the lunar day: Local noon is the driest time, perhaps because midday heat breaks up the water molecules. “The moon is breathing,” Sunshine says.

NASA is following up with the first comprehensive, up-close map of the moon, being created by the new Lunar Reconnaissance Orbiter (LRO). The spacecraft’s instruments include a cosmic-ray telescope for measuring radiation, an altimeter to create high-resolution 3-D surface renderings, radar to search for water ice, and a neutron detector to seek hydrogen (which some engineers have suggested mining as rocket fuel for a future moon base). In September, LRO began orbiting the moon’s poles. From an altitude of just 31 miles, it will spend the next year imaging key parts of the lunar landscape with two narrow-angle cameras, which can see details as small as three feet wide.

LRO’s early results have already caused a stir: The Diviner Lunar Radiometer Experiment sent back the first global temperature maps of the moon, revealing ultracold pockets in permanently shadowed portions of craters near the south pole. At –397 degrees Fahrenheit, the areas are the coldest places ever measured in the solar system, more frigid even than Pluto’s surface. The shadows are prime targets in the continuing search for water, which might accumulate there in deep freeze. A second water-hunting mission that launched along with LRO, the Lunar Crater Observation and Sensing Satellite (LCROSS), is making a splash of its own. On October 9 NASA crashed a Centaur rocket into the south pole’s Cabeus crater while the LCROSS spacecraft followed in its wake, briefly examining the material that was kicked up before doing its own swan dive four minutes later.