The Moon: A Visual Appreciation As We Approach the 45th Anniversary of Neil Armstrong's Historic Small Step 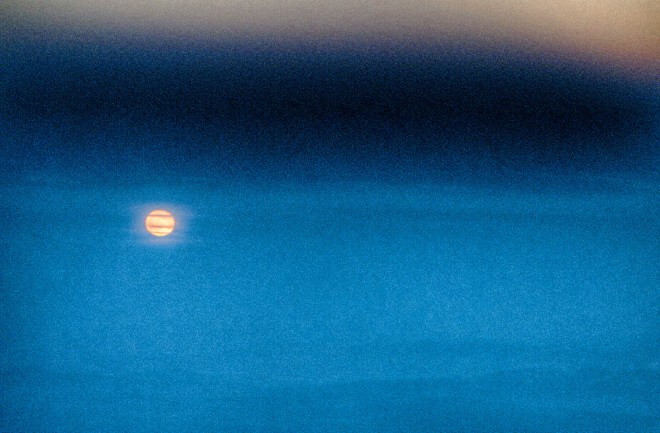 Supermoonrise over California. (Please click to enlarge. Photograph: © Tom Yulsman) In this post, I'm going to attempt to tie together the recent rising of a "supermoon," the first Moon landing, the painter Mark Rothko, and photographic technique. I hope you'll bear with me, keep reading, and click on all the images...  As I was flying home from San Francisco last Saturday, the hazy, twilight view out the window was suddenly pierced by a bright light emerging from the cloud tops. It was the full Moon rising, and it seemed a bit brighter than normal. So I pulled out my Sony RX100 camera, put the lens right up against the window and started shooting.

Photo: © Tom Yulsman The image above is an interpretation of what I saw. For the original, click on the thumbnail at right. I'll get to how I processed the image in a minute. But first, more about that moon. It was indeed brighter — about 30 percent so. It was also about 15 percent bigger (although that wasn't really noticeable from the plane). What I saw was, in fact, a rising "supermoon." This happens because the Moon's orbit around us inscribes an ellipse, and one side, perigee, is about 31,000 miles closer than the other, apogee. And when the full Moon just happens to coincide with the Moon's closest approach, we get a supermoon — more scientifically known as a perigee moon. We'll get to experience it two more times this summer: on August 10th and September 9th. In the meantime, there's another reason to appreciate the moon right now: We're approaching the 45th anniversary of Neil Armstrong's historic "one small step for a man, one giant leap for mankind."

Neil Armstrong of the Apollo 11 crew took this photograph on the Moon next to the Little West crater. The Lunar Module, used by Armstrong and his crew mate Edwin "Buzz" Aldrin to descend to the lunar surface, is seen in the background. (Click to enlarge. Source: NASA) Sunday, July 20th will mark 45 years since the first humans set foot on the Moon. Armstrong was the first one down the ladder of the Lunar Excursion Module, or LEM, the craft that brought them down to the lunar surface. As the whole world watched, he uttered those now immortal words — captured in this video of the moment. He was followed by crew mate Edwin "Buzz" Aldrin. A third crew mate, Michael Collins, orbited overhead in the Command Module, the spacecraft that would return them all safely to Earth. You can see the LEM in the upper left of the photograph above, along with Neil Armstrong's shadow at lower left. He took the photo while standing next to Little West Crater, to the right. This was an unplanned excursion of about 50 meters. As NASA describes it, Armstrong "ran over to get a look inside the crater, and this was the farthest either astronaut ventured from the landing site."

Looking north on the Moon, past a seismometer, a laser instrument, and Buzz Aldrin. (Source: NASA/GSFC/Arizona State University) I was just 13 years old when the LEM touched down on July 29th, 1969 — with just 25 or so seconds of fuel remaining. All these years later, I can remember the event with great clarity, helped, probably, by the images that Armstrong, Aldrin and Collins beamed back to Earth. So I guess I have a special appreciation for the moon. Which brings me full circle to the photo at the top of the post. Looking out the plane window, I was really struck by the intensity of the moonlight. It was quite spectacular. But the haze, the darkness, and shooting through a less-than pristine window, meant that what my camera captured did not do the scene justice. So I decided to use that lemon to make some lemonade. Here's what I did, and why: I was struck by one thing other than the Moon itself: the pale yellowish band of sunset glow at the top. Something about it reminded me vaguely of a Mark Rothko painting I had seen a few days earlier at the Asian Art Museum in San Francisco:

A painting by Mark Rothko on display at the Asian Art Museum in San Francisco. (Photograph: © Tom Yulsman) Rothko is one of my favorite painters (if not, perhaps, of the two women above). And it's not uncommon for me to see patterns of layering and color in nature that remind me of his work. In this case, it was certainly a bit of a stretch. And it took a bit of a stretch in processing to bring out what I saw in my mind's eye. First, I downloaded the original image onto my iPad and used an awesome application called Snapseed to do some initial processing. I cropped the image to draw attention to the Moon and the yellowish band at the top. Next, I used a Snapseed setting that creates an HDR effect. HDR stands for "high dynamic range," and with it I could bring out a much greater range of tonal detail than was visible in the original image. Next, I exported the photo and brought it onto my laptop where I used Apple's Aperture application to do additional processing. I launced a plug-in called DXO Filmpack, and used it to simulate the look of Kodak Elite Chrome 400 — a transparency film. This punched up the saturation, warmed the colors, and added quite a bit grain (which had the beneficial effect of obscuring some smudging created by the dirty airplane window). With some extra tweaks, including a little extra contrast and some definition to bring out the grain effect even more, I was done. I hope you like it.