The Man Who Plucks All the Strings

Brian Greene says string theory is still scientific even if it's not falsifiable. 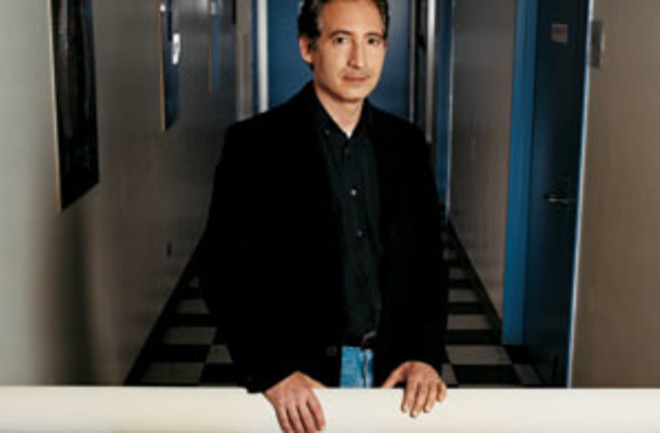 This article is a sample from DISCOVER's special Extreme Universe issue, available only on newsstands through March 22.

In the 1960s, Italian physicist Gabriele Veneziano developed a theory to explain the inner workings of the atom and failed—at first. Now many scientists believe an improved version of his conjecture, known as string theory, may do more than merely explain the atom. It could be the elusive theory of everything, a set of universal laws governing everything from the smallest quark within the atom to the largest cluster of galaxies, from the Big Bang to this moment.

String theory explains what you might see if you zoomed in without limit, past the cells that constitute your body, past the atoms that make up those cells, past even the electrons and gluons that those atoms are made of, all the way to the scale of a billionth of a trillionth of a trillionth of a centimeter. At that level, according to the theory, lies the foundation of all the particles and forces in the universe: one-dimensional strands of energy, or “strings,” vibrating in nine dimensions. That may seem wildly counterintuitive, but many scientists agree it is the most promising approach to explain the laws of physics.

Columbia University physicist Brian Greene has become the public face of string theory. He has provided insight into the topology of those additional dimensions, and in 1999 he introduced the theory to nonscientists in a best-selling book,

. In 2008 he cofounded the World Science Festival, an annual event that brings together scientists, artists, and ordinary people who are simply interested in the great questions of the universe. Greene talked to DISCOVER about how string theory has evolved, the attempts to find supporting evidence through new experiments, and the challenges of making science exciting to the general public.

What is the major problem string theory attempts to solve?Our current theory of gravity—Einstein’s general theory of relativity—and our current theory of the behavior of atoms and subatomic particles—quantum mechanics—both work fantastically well in their respective domains: general relativity for big things, quantum mechanics for small things. But when you try to meld the two, there is an incompatibility, a hostility. It’s uncomfortable to have two laws of physics, each claiming that the other somehow doesn’t work. In reality, both sets of laws are meant to work everywhere.

How does string theory create a single worldview that applies everywhere—and what exactly is a string, anyway?The fundamental idea is that the elementary constituents of matter—electrons, quarks, and so forth—might not be dots of no size, which is the traditional image, but rather little filaments. They could exist in either little loops of filament—tiny loops of energy—or little snippets of energy, open strings as we call them. When people stared at the mathematics governing the motion of these little filaments, they found, remarkably, that the math didn’t work in a universe that has only three dimensions of space. It required nine dimensions, and when you add in time it gives you 10 dimensions, which is an astoundingly bizarre idea. Nevertheless, it’s an idea that string theorists take seriously, because that’s where the math leads, and math has proved itself to be a very sure-footed guide to how the universe works.

What is the current status of string theory research?We have a range of possibilities for the shape of the extra dimensions. We have, in fact, catalogs of shapes. Literally, I could write out a book and turn page by page and show you different shapes for the extra dimensions that people have mathematically determined as being possible. The problem is we don’t know which page is the right one, and the number of pages has grown fantastically in the last few years. There are on the order of at least 10^500 different pages now [a number that dwarfs the number of particles in the universe], and when you’re faced with a book of that many pages, some people throw up their hands in disgust. Others say that maybe all those shapes are out there in different universes. That’s the most recent and controversial approach that people have been following.

So there could be a multitude of other universes, each corresponding to a different solution or “page” of string theory?As scientists we track down all promising leads, and there’s reason to suspect that our universe may be one of many—a single bubble in a huge bubble bath of other universes. And you can then imagine that maybe these different bubbles all have different shapes for their extra dimensions. This suggests a landscape of different universes with different forms of extra dimensions and therefore different properties within those universes. If that is true, our universe would be one of many, and then the question becomes why are we in this one and not in some other one.

One of your findings is helping scientists make sense of those extra dimensions and other universes, right? We found that classical geometry, the kind you learn in elementary school, breaks down at extremely small scales. Instead, quantum geometry takes over, in which, for example, there can be two very different shapes in the extra dimensions that nevertheless yield exactly the same physics. In other words, there can be two different shapes from the perspective of a classical mathematician, but when dressed up with their quantum properties they become identical. What got us really excited was that horrendously complicated calculations framed in the language relevant to one shape became simple when reframed using the other shape. People like to talk about the Eskimos’ having 20 terms for snow and ice. It might take us a paragraph or a book to try to describe those distinctions, because our language is not set up to describe them. Similarly, with these shapes we’re basically rephrasing things from one language to another, and suddenly some very clunky and cumbersome descriptions become sleek, elegant, and completely solvable.

Critics of string theory have called it unscientific because it is not falsifiable. How can we evaluate string theory?Falsifiability for a theory is great, but a theory can still be respectable even if it is not falsifiable, as long as it is verifiable. There are aspects of a theory that you can go out and look for and confirm, and that’s another way to gain confidence in it. For instance, it’s really hard to falsify the statement that there is life on another planet, but you can verify it by finding one example. We’re hoping that certain features of string theory are confirmable.

What kind of things are you looking for?At the Large Hadron Collider in Geneva, there are features of string theory that may result in data that have no other natural explanation. For instance, string theory suggests that there should be a class of particles called supersymmetric particles [that every particle should have a partner particle], and we’ve never seen them before. If we see them, it won’t prove string theory right, but it would be a strong piece of circumstantial evidence, because their most natural home is in string theory. There’s also a long-shot chance that scientists will find evidence for extra dimensions at the LHC. String theory is not the only theory that can accommodate extra dimensions, but it certainly is the one that really demands and requires it.

How are physicists trying to find extra dimensions?When two protons collide, as they will be doing quite frequently in the LHC, some of the debris created from the collision might be ejected out of our familiar dimensions and crammed into the others. We could notice that by detecting missing energy in our dimensions. The energy would seemingly disappear, but in reality it would just go to a place that our detectors don’t have direct access to.

If today you somehow found out that string theory is wrong, how would you feel about all your work of the past 25 years?If it was false by virtue of an actual error that we all overlooked for 25 years, I’d feel pretty bad. But that’s so unlikely—nearly impossible, I’d say. The more likely thing is that we’ll learn that the theory is perhaps incapable of describing physics as we know it. The bottom line is progress, and if we can understand why it is that string theory failed, that will be progress. It won’t be the progress that we had hoped for, but it will be progress nevertheless, and that’s how science works.

How confident are you that string theory is correct?One time I was listening to a radio program and I was described as a believer in string theory. I almost hit the roof because I don’t “believe” in string theory. I don’t believe in anything until it’s experimentally proven. I do feel strongly that string theory is our best hope for making progress at unifying gravity and quantum mechanics. Moreover, I’ve been spectacularly impressed over the past 20 years with the progress that string theory has made. But that’s not proof, and therefore I don’t believe it. There are a lot of very interesting ideas that are worthy of attention, and sometimes worthy of decades of attention, because they have such capacity to make progress on deep, unsolved questions. But that doesn’t mean that you believe the ideas are right. If you want to use the word belief, I simply believe that this is the best approach that we have.

You are the author of a best-selling book and the cofounder of a popular science festival. How do you go about getting people interested in something as esoteric as string theory?I think many people had experiences in school where science was about learning details or completing rigorous calculations that may not have aligned with their personality. What gets missed is that those details are ultimately used by science to address big questions that we all care about: Where did the universe come from? Where did life come from? Will it all eventually come to an end? I think students often, by virtue of the way we teach, miss the big story and are led through the gritty details, leaving a bad taste in the mouth. Tracy Day and I created the World Science Festival to go around existing structures and create a place where people, led by real scientists, could immerse themselves in science’s great stories and big ideas. Don’t get me wrong, the details are important, but people will never want to know the details unless they can focus on the big ideas.

This article is a sample from DISCOVER's special Extreme Universe issue, available only on newsstands through March 22.