The Incredible Shrinking Proton That Could Rattle the Physics World 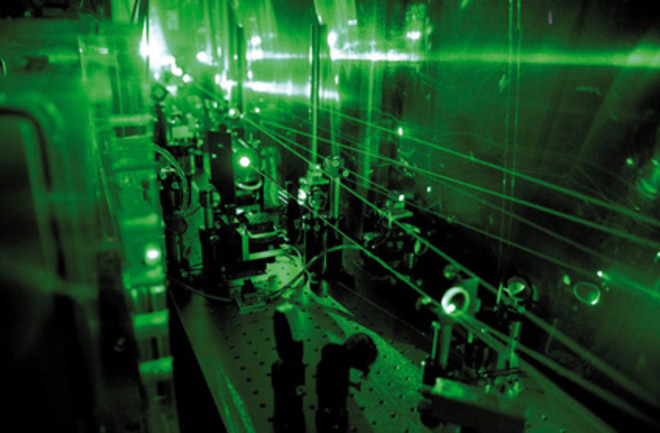 It wasn't supposed to be like this. The Higgs boson, dark matter, neutrinos—weird or poorly understood phenomena like these seemed the likely candidates to provide a surprise that changes particle physics. Not an old standby like the proton. But the big story this week in Nature is that we might have been wrong all along in estimating something very basic about the humble proton: its size. A team from the Paul-Scherrer Institute in Switzerland that's been tackling this for a decade says its arduous measurements of the proton show it is 4 percent smaller than the previous best estimate. For something as simple as the size of a proton, one of the basic measurements upon with the standard model of particle physics is built, 4 percent is a vast expanse that could shake up quantum electrodynamics if it's true.

If the [standard model] turns out to be wrong, "it would be quite revolutionary. It would mean that we know a lot less than we thought we knew," said physicist Peter J. Mohr of the National Institute of Standards and Technology in Gaithersburg, Md., who was not involved in the research. "If it is a fundamental problem, we don't know what the consequences are yet" [Los Angeles Times].

Simply, the long-standing value used for a proton's radius is 0.8768 femtometers, (a femtometer equals one quadrillionth of a meter). But the study team found it to be 0.84184 femtometers. How'd they make their measurement? First, think of the standard picture of electrons orbiting around a proton:

According to quantum mechanics, an electron can orbit only at certain specific distances, called energy levels, from its proton. The electron can jump up to a higher energy level if a particle of light hits it, or drop down to a lower one if it lets some light go. Physicists measure the energy of the absorbed or released light to determine how far one energy level is from another, and use calculations based on quantum electrodynamics to transform that energy difference into a number for the size of the proton [Wired.com].

That was how physicists derived their previous estimate, using simple hydrogen atoms. But this team relied on muons

instead of electrons. Muons are 200 times heavier than electrons; they orbit closer to protons and are more sensitive to the proton's size. However, they don't last long and there aren't many of them, so the team had to be quick:

The team knew that firing a laser at the atom before the muon decays should excite the muon, causing it to move to a higher energy level—a higher orbit around the proton. The muon should then release the extra energy as x-rays and move to a lower energy level. The distance between these energy levels is determined by the size of the proton, which in turn dictates the frequency of the emitted x-rays [National Geographic].

Thus, they should have seen the specific frequency related to the accepted size of a proton. Just one problem: The scientists didn't see that frequency. Instead, their x-ray readings corresponded to the 4-percent-smaller size. Now the task at hand is to check whether this study is somehow flawed, or is in fact a finding that will shake up physics

In an editorial accompanying the report in the journal Nature, physicist Jeff Flowers of the National Physical Laboratory in Teddington, England, said there were three possibilities: Either the experimenters have made a mistake, the calculations used in determining the size of the proton are wrong or, potentially most exciting and disturbing, the standard model has some kind of problem [Los Angeles Times].

Related Content: DISCOVER: Is the Search for Immutable Laws of Nature a Wild Goose Chase?

DISCOVER: Ice Fishing for Neutrinos from the Middle of the Galaxy

DISCOVER: The Mystery of the Rocketing Particles That Shouldn't Exist

Image: F. REISER & A. ANTOGNINI, PAUL-SCHERRER-INST (the laser used in the research)