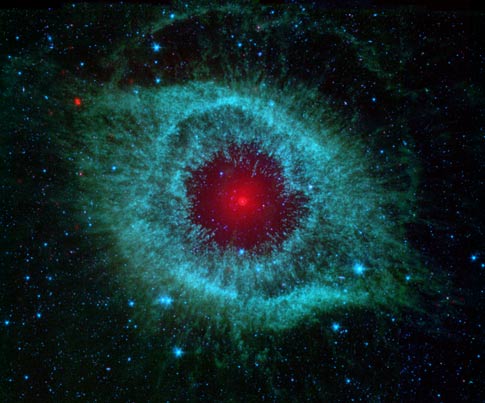 Warning: that links to a 7 Mb image, but it's very pretty. What you're looking at is one of my favorite kinds of cosmic critters: a planetary nebula, specifically, the Helix Nebula. When a star like the Sun starts to die, it bloats up into a red giant. The solar wind, a stream of particles emitted from the Sun, becomes much denser. The majority -- maybe even all -- of the outer layers of the star get blown off, exposing the hot white core of the star. This white dwarf is extremely dense and extremely hot, and as the last bits of the red giant are ejected, the heat from the dwarf drive the wind ever faster. The fast wind catches up with the slow wind, slamming into it, compressing it. All manners of fantastic shapes can result. In the case of the Helix, it's likely to actually be a flattened disk which we are seeing almost exactly face-on. What's interesting about this new image from the Spitzer Space telescope is the red glow in the very center. The astronomers taking this image were surprised by it. 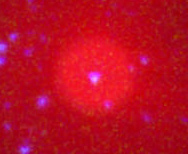 Why? Because it indicates the presence of a disk of dust near the star. Actually, some dust is to be expected. Red giants make a lot of it, but that dust will be spread out over a huge region and may be difficult to detect. This dust is very near the core of the nebula, surrounding the white dwarf itself. Where did it come from? The scientists think it might come from any comets that were in the system before the star died. The distance of the dust from the white dwarf is about 35 and 150 times the Earth's distance from the Sun -- the same region dominated by giant comet-like iceballs in our solar system. In the Helix, they may have survived the red giant phase of their star, and now are supplying the disk with dust during collisions. I wonder if many of the iceballs evaporated during the red giant phase as well; this would also release dust. The press release doesn't say; I'll have to find a paper about this. Interestingly, this may answer another question about the Helix. It's been known that the white dwarf gives off X-rays, more than expected for that type of star. The presence of the dust may solve that riddle. Dust streaming down into the inner regions of that now-dead solar system may interact with the white dwarf's magnetic field, generating X-rays. That would make this discovery a twofer. Always a bonus in astronomy! Planetary nebula are so-named because through a small telescope they appear disk-like and can be a pale green (due to the glow of ionized oxygen). For years we've had to explain to curious non-astronomers that they have nothing to do with planets. Now we think that as the red giant swallows up any existing planets, the shape of the nebula may be modified, so planets are involved. And now it looks like comets are as well! Funny: the Helix looks about as exotic and weird as it could, yet it also has all the signs of once being a homey place much like our own solar system. Take a good look: in a couple of billions years, we may appear very much like that nebula. And look fast, because as the wind dissipates, ever expanding, the nebula will fade. In a mere 10,000 years there won't be anything left to see.