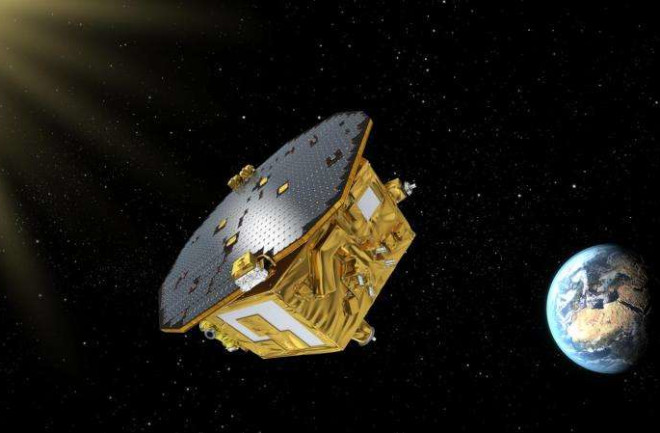 An artist's rendering of LISA Pathfinder floating in space. (Credit: ESA–C.Carreau) As scientists announced the discovery of gravitational waves for the first time last month, an even more sensitive experiment was already underway. Scientists officially took the hunt for gravitational waves to outer space when the LISA Pathfinder mission launched in December 2015. LISA is a floating experiment parked nearly one million miles away from Earth, at the exact point where the gravitational pull of the Earth is matched by that of the sun. LISA Pathfinder officially started the science portion of its mission Monday, and will test whether it's possible to build a hyper-sensitive, space-based gravitational wave detector. The success of the LISA experiment hinges on getting two small gold-platinum cubes to float perfectly still about 16 inches apart in the vacuum of space. Over the next six months, researchers will put the spacecraft and cubes through a battery of tests to understand the ways different forces could disturb the test cubes' perfect free fall. The idea is to eliminate all the noise, except the noise generated by a passing gravitational wave.

LISA's journey to its final destination, almost a million miles away from Earth, toward the Sun. Credit: ESA/ATG medialab

LISA is not meant to find gravitational waves, however. The current mission is meant only as a proof-of-concept, and to tease out design flaws and test the equipment aboard the spacecraft in preparation for the next phase of the mission, called eLISA. That mission is set to launch in 2034, and the experiment will consist of a "mother" and two "daughter" satellites arranged in an L-shape and connected by lasers, much like LIGO and other detectors here on Earth. However, instead of arms spaced 4 kilometers apart like LIGO's, eLISA's laser arms will be separated by 1 million kilometers. If each eLISA satellite can remain perfectly still, it will enable scientists to detect gravitational waves at much lower frequencies, such as those created by binary supermassive black holes, ultra-compact binaries and small black holes falling into supermassive black holes. LISA Pathfinder will prove whether this is possible. Gravitational waves require us to observe something nearly beyond perception — the waves that LIGO recorded squeezed its 4-kilometer-long arms by about 1/10,000th the diameter of a proton. One of the biggest problems LIGO had to overcome was the presence of unwanted vibrations caused by everything from tiny earthquakes to traffic noise, all of which could throw off the measurements. By taking the gravitational wave hunt into space, researchers hope to stay far away from any possible perturbations.

An illustration of the LISA experiment. The two gold cubes are each monitored by a laser interferometer which precisely tracks their position. (Credit: ESA/ATG medialab)

The LISA spacecraft was launched on Dec. 2, 2015, and officially began operations on March 1 with a weeklong commissioning period, followed by the commencement of scientific experiments on Monday.Over the next six months, scientists will perform a variety of experiments on the masses and the spacecraft itself to test LISA Pathfinder's measuring equipment and account for all possible sources that could disturb the cubes.One experiment will raise the temperature inside the high vacuum environment of their housing, heating the few gas molecules that are left inside, to measure if this has any effect on the cubes. The team will also apply increasingly stronger magnetic and electric forces to assess the amount of force that is needed to divert them from free fall. The researchers say that their equipment should provide measurements accurate up to .01 nanometers, or a millionth of a millionth of a meter. The data gathered will help construct a model that will eliminate all other sources of motion except for gravity. The era of gravitational wave astronomy is officially underway, and things are only going to get more interesting.