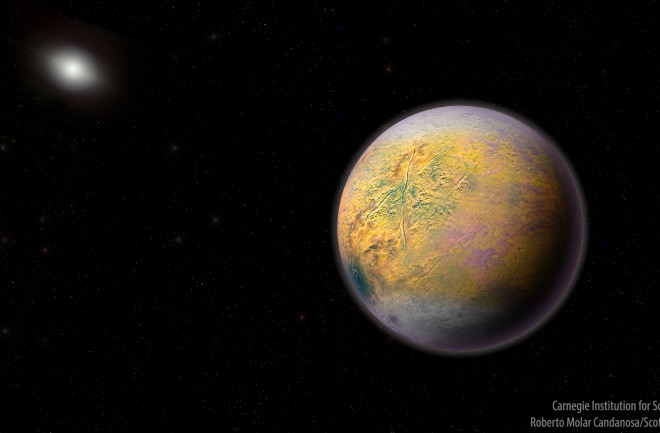 An artist's conception of a distant Solar System Planet X, which could be shaping the orbits of smaller extremely distant outer Solar System objects like 2015 TG387 discovered by a team of Carnegie's Scott Sheppard, Northern Arizona University's Chad Trujillo, and the University of Hawaii's David Tholen. (Credit: Illustration by Roberto Molar Candanosa and Scott Sheppard, courtesy of Carnegie Institution for Science)

Far beyond the orbits of the solar system’s eight planets, astronomers have found another object they’ve nicknamed “The Goblin.” It’s a small world traveling a lonely path through the outer reaches of our cosmic neighborhood, and joins a small club of dwarf planets and other planet-like objects out beyond Neptune.

Most excitingly, the object’s movements fit into previous theories regarding a possible “Planet X” hiding far away in our solar system, and could help astronomers to find it.

The dwarf planet’s official name is 2015 TG387, and it was discovered three years ago by a team of researchers using the Subaru telescope atop Mauna Kea in Hawaii. Led by Scott Sheppard of the Carnegie Institution for Science, the astronomers were scanning broad swathes of the sky in search of faint glimmers that might betray new objects in the solar system. Sheppard, who found another similar object just four years ago, spent the next three years confirming the original sighting with his team and announced the find today in the Astronomical Journal.

The dwarf planet is about 190 miles in diameter based on preliminary measurements. Pluto, for comparison, is about 1,500 miles in diameter. The Goblin is one of just a few objects whose elliptical orbits never take them closer to the sun than Neptune. Just two, 2012 VP113 and 90377 Sedna have a perihelion (the point of an object’s orbit closest to the sun) farther out than The Goblin, and its orbit actually takes it far beyond them at its most distant point.

The dwarf planet is estimated to reach some 2,300 Astronomical Units (AU) from the sun at maximum, putting it more than twice as far out as Sedna. Earth is one AU from the sun, so the new object, at maximum, is 2,300 times further from the sun than we are.

2015 TG378’s nickname comes from the letters TG in its official name, as well as a recognition of the fact that it was found around Halloween, the authors say.

The orbits of the new extreme dwarf planet 2015 TG387 and its fellow Inner Oort Cloud objects 2012 VP113 and Sedna as compared with the rest of the Solar System. 2015 TG387 was nicknamed 'The Goblin' by the discoverers, as its provisional designation contains TG and the object was first seen near Halloween. 2015 TG387 has a larger semi-major axis than either 2012 VP113 or Sedna, which means it travels much further from the Sun at its most distant point in its orbit, which is around 2300 AU. (Credit: Illustration by Roberto Molar Candanosa and Scott Sheppard, courtesy of Carnegie Institution for Science)

The orbits of the new extreme dwarf planet 2015 TG387 and its fellow Inner Oort Cloud objects 2012 VP113 and Sedna as compared with the rest of the Solar System. 2015 TG387 was nicknamed ‘The Goblin’ by the discoverers, as its provisional designation contains TG and the object was first seen near Halloween. 2015 TG387 has a larger semi-major axis than either 2012 VP113 or Sedna, which means it travels much further from the Sun at its most distant point in its orbit, which is around 2300 AU. (Credit: Illustration by Roberto Molar Candanosa and Scott Sheppard, courtesy of Carnegie Institution for Science)

The vast distances the object must travel to complete an orbit means that it only travels around the Sun once every 40,000 years. We were lucky we caught The Goblin when we did, says Sheppard, because it’s only visible to use with current technology less than one percent of the time.

And the find reinforces the idea that there are likely many more objects like it in our solar system orbiting out of sight.

“For over 99 percent of TG387’s orbit, it would be too faint for us to detect it,” Sheppard says. “This suggests we are only seeing the tip of the iceberg of these kinds of objects and that there are thousands of them that are too far away for us to see.”

As of right now, we only know of a handful of these so-called “Trans-Neptunian Objects,” those that live out beyond Neptune’s orbit. None so far have been designated planets, but at least two, Eris and Pluto, are quite large, with diameters of well over 1,000 miles. Most follow eccentric orbits that loop relatively near to the sun before taking them to the edge of the Kuiper Belt some 50 AU out and beyond. This makes such objects hard to find, but modern telescopes have begun to pick them out against the blackness of space.

The few that we do know of behave in a curious way, though. Though most orbit too far from the giant planets like Jupiter and Neptune to be influenced by their gravity, most distant objects seem to be moving in accordance with some powerful gravitational force in the outer solar system. This planetary harmony was first picked up on by Sheppard and collaborator Chad Trujillo in 2012, when they discovered 2012 VP113, but subsequent discoveries have only bolstered their theory.

In essence, their orbits are arranged in such a way that it seems like there’s another large planet tugging them into alignment. Called either “Planet X” or “Planet Nine,” this still-hypothetical world could remain undiscovered in much the same way The Goblin did.

Sheppard says that The Goblin’s orbit fits exactly into their models of how distant objects should behave if Planet X exists, further bolstering the notion that another massive world may be hiding in our solar system.

Sheppard hopes to find more objects like The Goblin to further pin down the location and orbit of the potential Planet Nine. The outer solar system is still a largely unknown place, and astronomers will likely be discovering new objects there for years to come.

“There are a lot of exotic and extreme objects yet to be found in the outer solar system,” he says. “We are only just now uncovering what the very outer solar system might look like and what might be out there.”

Including, perhaps, a true ninth planet.