The Ghost in the Shell

Stars are one of the fundamental building blocks of the Universe. Huge, hot, and powerful, they emit energy that can be detected across vast reaches of space. For as long as they live (so to speak) they glow with a fierce luminosity. And even when they die they can announce their presence in weird and wonderful ways. Meet U Camelopardalis, just such a dying star about 1400 light years from Earth: 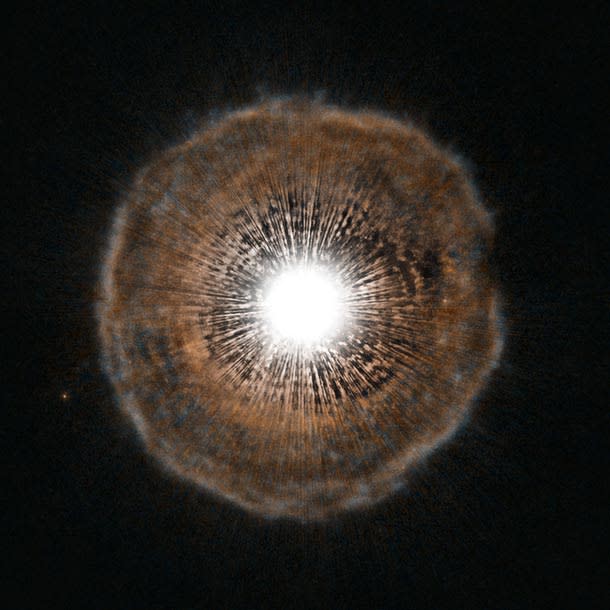 [Click to doomsdaymachinenate.] U Cam is a red giant, a star that was once like the Sun but has gone much further along its evolutionary path. Our Sun is fusing hydrogen steadily into helium in its core, providing warmth and light for us. U Cam ran out of hydrogen in its core long ago, and began fusing helium into carbon. Then it even ran out of helium as a fuel! The core is now essentially an extremely hot ball of carbon, squeezed by pressure to within an inch of its life. There's still helium outside the core, and gets so much heat from the core's radiation that it's fusing in a thin shell. Think of it like a very hot skin around an orange. This helium fusion is ridiculously dependent on temperature. Increase the heat just a wee bit and the fusion rate increases madly, generating huge amounts of energy, which get dumped into the outer layers of the star on very short timescales. And by "short" I mean like years. Not millions of years. Just years. When this happens the star swells immensely and ejects its topmost layer, like a solar wind on cosmic steroids. This event doesn't last long, maybe a century or so, then it subsides. But that shell of ejected gas expands out from the star, eventually dissipating over millennia. And that's where U Cam is right now. Not long ago its core underwent one of these paroxysms, and the star blasted out the shell of material you can see in this Hubble Space Telescope image. Measuring the expansion rate, it looks like this shell was ejected about 700 years ago, and the event only took 50 years to unfold! Because these events don't last long compared to the life of the star, it's rare to see them. U Cam is one of the best of only a handful of such stars known. In the image you can see how thin the shell is, indicating the event happened rather quickly (if it took a long time the shell would be thicker). I'll note that the total mass of the shell is only about a tenth the mass of the Earth! It's spread out over so much volume of space that it's barely more dense than the vacuum surrounding it. The star itself is actually just a dot on this scale, but is so bright it overwhelmed the detector a bit and looks far bigger than it really is. Those light and dark radial spikes are not real; they're artifacts of the way the camera sees light from a star. They're enhanced in this picture somewhat more than normal because the astronomers used another image of a star to subtract from this image to reduce U Cam's brightness - that lets the fainter shell be seen more easily. When I worked on Hubble I wrote a lot of software to do this kind of thing, and I saw spikes just like that in all my data. Irritating for science, but kinda pretty in the picture. But this is more than just a pretty picture. What we're seeing here is a glimpse of our own future. Our own Sun is on the same path as U Cam. In a little over 6 billion years the Sun will run out of hydrogen in its core, and about 1.5 billion years later will run out of helium to fuse as well. At this point, 7.75 or so billion years from right now, the Sun will be very much in the same position as U Cam. It will undergo as many as three or four of these shell-emitting events, each blasting out a thin bubble of gas and dust that will expand away, eventually to merge with the ethereal material floating in between the stars. By the time the last one erupts, it will strip away the last outer layers of the Sun, exposing the hot white dwarf of its core, which, over tens of billions of years, will eventually fade to black. But take heart! By then the Earth will have been long dead anyway, scorched to a cinder when the Sun was a red giant! Yay? Actually, considering we're talking about timespans of hundreds of millions and billions of years, I'm rather hopeful that by then humanity will have found other, more youthful stars to live near. Or who knows, maybe by then we won't even need to live on warm planets. Predicting how stars will change over eons is relatively easy; understanding where people will be even in mere decades is a fool's game. But I can hope, by the time our own star dies, we'll have found some way to move on. The Universe is large and deep, both in space and in time. There's plenty of room to grow. [NOTE: I have an entire chapter with details and a timeline of how our Sun will grow old and die in my book Death from the Skies! Just so's you know.] Image credit: ESA/Hubble, NASA and H. Olofsson (Onsala Space Observatory)