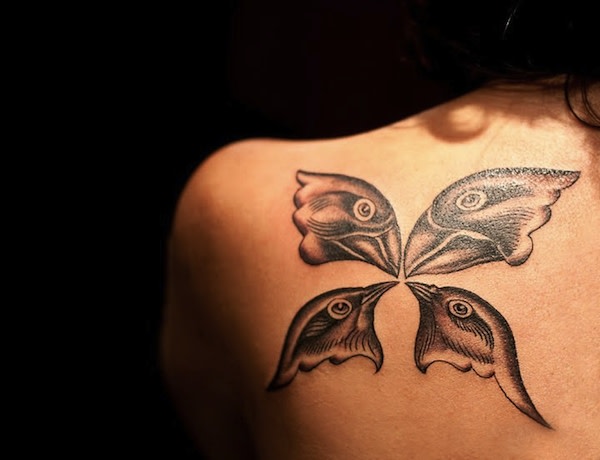 Duygu writes, "I am a developmental biologist by training. Actually, my Ph.D. thesis does not really have an evolutionary focus because I study joint regeneration in embryonic chick limb. However, I have been an evolution enthusiast and also an activist for educating public about the theory of evolution for a long time. I could not imagine a better tattoo: Darwin's finches arranged to look like a butterfly...I got it in 2009--Darwin's 200th anniversary and On The Origin of Species' 150th anniversary. I spent last few years reading and writing a lot on evolution, as well as playing the "editor-in-chief" for translating UC Berkeley's Understanding Evolution website into Turkish (Evrimi Anlamak - a completely volunteer work by our group called Hard-workers for Evolution). All in all, I am a biologist and 'nothing in biology makes sense except in the light of evolution'... So, I celebrate it with four finches on my shoulder!"