The Forecast on Neptune? Diamond Rain 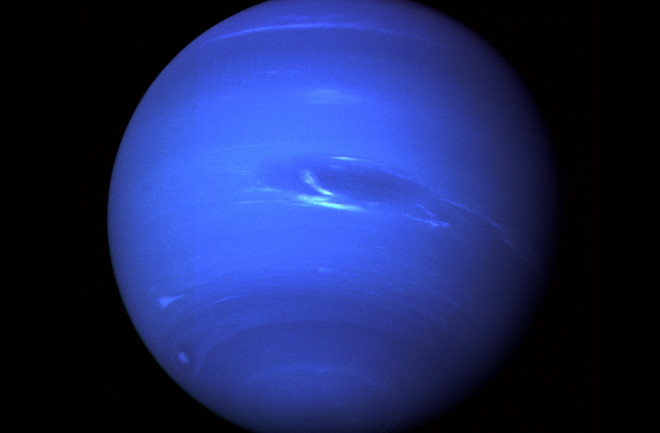 Here be diamonds. (Credit: NASA) Some planets in our solar system are hiding a gleaming bounty deep within: showers of diamonds formed via crushing pressures and blazing temperatures. Uranus and Neptune, the ice giants, are massive balls of mostly hydrogen and helium, with some water and ammonia. The "ices" give them their nicknames, but temperatures soar to thousands of degrees deep inside. Mixed in with the gases is carbon, mostly joined to hydrogen atoms to form hydrocarbons. Go down deep enough, and the conditions force the hydrogen atoms out, pressing the carbon atoms together to form solid diamonds, which researchers believe gradually filter through the planet's interior as a kind of glittering rain.

The presence of diamonds deep within ice giants has been suspected for some time, but experiments at the SLAC National Accelerator Laboratory have given credence to that theory by allowing researchers to create diamonds through a process that's analogous to what occurs on gas giants. The study took advantage of two powerful light sources at the facility, an optical laser to recreate the intense temperatures and pressures and an X-ray laser to take ultra-fast images of the process as it occurred. Researchers created a pair of overlapping shock waves inside a piece of polystyrene plastic, chosen because its carbon and hydrogen components mimic the methane interior of the ice giants. The shock waves reach temperatures of around 5,000 kelvin and pressures of 150 gigapascals — over 10,000 times our own atmosphere — similar to those found within Uranus and Neptune.

The Matter in Extreme Conditions instrument at SLAC, used to create the nanodiamonds. (Credit: SLAC National Accelerator Laboratory) When the two shock waves met, they created a single powerful kick sufficient to separate the carbon and hydrogen atoms and compress the carbon into diamond. The X-ray laser, meanwhile, sent out femtosecond pulses of radiation that acted as a super-fast camera shutter, allowing the researchers to watch the diamonds as they form.

In a paper published Monday in Nature Astronomy, SLAC physicists verified that tiny diamonds, only a few nanometers wide, were created in their model planets, suggesting that the same should hold for Uranus and Neptune. While previous experiments with diamond anvils and other instruments meant to recreate high-pressure environments have hinted that diamond formation could occur if the conditions are right, this is the first time it's actually been observed. What this likely means for the ice giants is that much larger diamonds, on the order of millions of carats, could exist deep within, born out of the intense pressures and temperatures. These massive jewels likely precipitate slowly through the liquid mantles of the planets like diamond showers, eventually settling into a layer nestled near the rocky core. The findings help to pin down the interior compositions of giant gaseous planets, the majority of which exist so deep that current instruments cannot penetrate. What we do know is based on measurements of the planets' radius and mass, which offer clues about the elements they contain. There's still a whole lot of uncertainty, however, and exploring what might happen inside with experiments here on Earth helps us to set more rigid boundaries for how the interiors of gas giants behave. This could help to explain, for example, why Uranus and Neptune, made of largely the same materials, are such different shades of blue, or how the massive weather patterns on gas giants form and disperse. If nothing else, it indicates that diamonds are probably far less precious throughout the solar system.