The Flood Basalts of Mercury 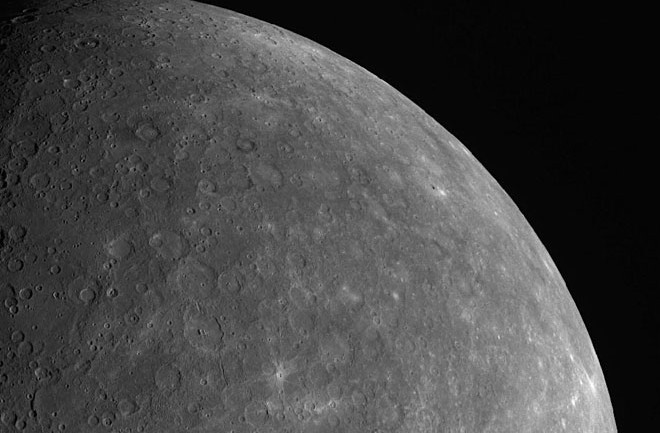 Every once in a while I dabble in extraterrestrial volcanism -- I mean, one could easily make the argument that we have plenty of volcanism on Earth -- but it is fun to look at volcanic features on other planets. All the terrestrial planets -- Mercury, Venus, Earth and Mars -- show evidence of volcanic activity in their past. Now, when in their past in a question that is highly debated. For Earth, we know it is currently active, but after that it is a different story. There are some suggestions that Venus might have active volcanism, mostly based on intermittent sulfur dioxide plumes that appear in the thick atmosphere and young-looking volcanic features seen on the surface, but no eruption has been directly observed. As for Mars, the most recent volcanism could be in the last few million years on the flanks of Olympus Mons. However, this is based on studies of cratering of the surface of Mars, so the errors on the ages of the flows might be in the millions of years. That leaves us with Mercury, possibly the most enigmatic planet of the inner terrestrial planets. Not only is it planet closest to the sun (now that no one thinks Vulcan exists anymore), it is also the second densest of the planets (after Earth) and the smallest of the planets*. It is also believed to still have a molten iron core as Mercury generates its own magnetic field, a bit of a surprise considering the planet's size (and thus the conductive cooling since its formation). Mercury was also one of the least-visited planets in the solar system until recently, when NASA's Messenger mission went into orbit around the reclusive planet. There is now a special edition of Science that talks about some of the initial discoveries.

So, why do I bring this all up? Well, until recently, it was thought that Mercury was almost a twin to our Moon -- that being a body covered in craters and that was about it. It now appears that the surface of the planet is much more dynamic than previously thought -- specifically, there are many parts that look highly volcanic in nature. Now, most of the volcanism looks to be old, upwards of 3.5 billion years old. However, that is a full billion years after the formation of the solar system! One such volcanic discovery is of a vast plain of lava on the northern polar region that looks to be a large flood basalt province. This Mercurian flood basalt dwarfs pretty much all known terrestrial flood basalts, covering a full 6% of the surface of the planet and reaching up to 1.6 km thick in some parts -- so, assuming an average depth of 0.5 km, that gives a volume of ~2.2 million km^3 (and that is a rough estimate at best). The Siberian Traps that erupted ~250 million years ago cover a mere 1.3% of the Earth's surface in comparison (for a volume of 1-4 million km^3, but Earth has almost 7 times more surface area than Mercury). There have also been discoveries of large, channel-like features covering parts of Mercury, some upwards of 20 km wide. These most likely had to be carved/created by lava flows as liquid water has never been present on the surface of the planet (it is just too hot!), so Mercury must have been an impressively volcanic body at some point in the solar system's past. There is even the potential for Mercurian calderas in some of the images, including the "Spider." All in all, Mercury looks like it has had as a volcanically active past as its bigger siblings in the terrestrial planets. *at least since Pluto's demotion.