The Fertile Crescent of Space Exploration 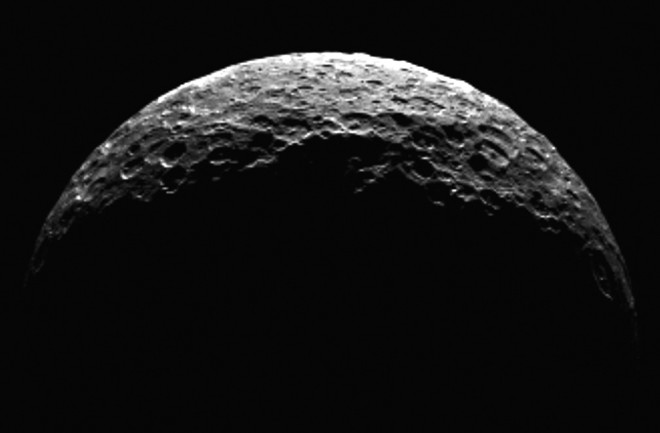 Ceres as seen by the Dawn spacecraft from a distance of 21,000 miles. We're looking down at the dwarf planet's north pole in this view. (Credit: NASA/JPL/UCLA/MPS/DLR/IDA) The new image of Ceres that NASA released today is doubly thrilling. It unveils more of the landscape of this mysterious in-betweener world--an object classified both as a giant asteroid and as a dwarf planet, a type of object never before observed up close. But it also taps into the unique significance of the crescent shape, both to our culture and to our science. The crescent is one of the most recognizable icons in astronomy. It is the signature element of the oldest known representation of the heavens, the 4,000-year-old Nebra Sky Disc; it appears on numerous national flags; and it is a staple of the artwork in children's books. For the scientist, the crescent holds special significance far beyond that, however. To observe a crescent, you must be farther from the sun than the object you are viewing. For any body that is farther out than Earth--that is, for all of the solar system other than Mercury, Venus, and the moon--space probes are the only way to see a crescent. In short, a crescent is the no-brainer test of exploration: It tells you in one glance that humans have gone to an exotic place in space.

The foot-wide Nebra Sky Disc displays the sun and crescent moon. It is the oldest known literal depiction of the sky. [Credit: Wikimedia]To celebrate the indoctrination of Ceres into the crescent-exploration club, I've pulled together a collection of the most notable other members. But first let's understand a little more about the glorious new Ceres image itself. It comes from the Dawn spacecraft, an intrepid voyager that already paid a visit to the asteroid Vesta. When Dawn went into orbit around Ceres last month, it became the first probe ever to circle two different celestial objects. Dawn was able to pull off that feat because it uses an unusual type of engine that creates thrust from a flow of high-speed xenon ions (electrically charged atoms) instead of chemical propellant. An ion engine can run for a long time at very high efficiency. The tradeoff is that it produces a weak thrust, which almost got Dawn into serious trouble. Last fall a stray cosmic ray caused an unplanned engine shutdown. By the time the ground controllers got the probe operating again, they had to plot a new trajectory to Ceres. The updated path approached the dwarf planet from the night side, staring into darkness. That is why we haven't seen any new images over the past month, and why the view we get today is just a thin crescent. Fear not: Dawn is about to go into a proper, circular orbit around Ceres, spiraling slowly inward over the coming months. The really good stuff is about to begin, and then will keep getting better and better. While we are waiting to find out about the strange white dots and other Ceres puzzles, here is a look back at some other great milestones in crescents. (For updates on space images and other related news, follow me on Twitter: @coreyspowell)

Crescent Mars (above) was captured by Viking Orbiter 2 as it approached the Red Planet in 1976. The Viking mission is best remembered for the two landers that scooped up Martian soil and searched for life, with frustratingly inconclusive results. Less well known, each lander was accompanied by an orbiter that mapped the planet. The resulting images were crude by today's standards, but my talented colleague Emily Lakdawalla at the Planetary Society has cleaned them up and reprocessed them. Looking at them, it is easy to channel the slow-build anticipation of the historic encounter. [Credit: NASA/JPL/Lakdawalla, with a full explanation here.]

Crescent Jupiter (above), seen by NASA's Voyager 2 in 1979, is so thin that it looks more like a ring. That was deliberate. Mission planners wanted to get a look at Jupiter's ring which, unlike Saturn's brilliant rings, is so tenuous that it is visible only when backlit, with the sun blocked out. What you see here is a near-eclipse of the sun by Jupiter, with sunlight streaming over and through the planet's atmosphere while scattering off the ring particles. The odd double-image quality is the result of taking the picture twice through two different filters, one orange and one violet. [Credit: NASA/JPL, with the original here.]

Crescent Saturn (above) is of relatively recent vintage, taken in 2007 by the Cassini spacecraft from its orbit around the ringed planet. Because of Cassini's tilted path it was able to see Saturn not only from behind but also from above; at the time, the probe was about 700,000 miles from the planet. There are earlier images of crescent Saturn, but none lovelier in my opinion. The colors here are real, closely matching what you would see if you had the good fortune to be floating in this position--with an appropriate suit and spacecraft, of course. [Credit: NASA/JPL/Space Science Institute, with the original here.]

Crescent Uranus (above) requires a trip back into history, because there is only one spacecraft that ever captured a look-over-the-shoulders view of the 7th planet. Voyager 2 took this shot as it flew past Uranus on February 1, 1986, stealing a little bit of kinetic energy from the planet in order to speed the probe on to its next destination. Methane in the atmosphere produces the blue-green tinge seen in this image. There are no funded plans to visit Uranus again, despite the planet's considerable scientific appeal. There are good concepts of how to do it, though. [Credit: NASA/JPL, with the original here.]

Crescent Neptune (above) looks an awful lot like Uranus, doesn't it? The two planets are similar in size and composition, although they also differ in some profound ways. Neptune is denser and more energetic inside; it has a more dynamic atmosphere (or at least, it did at the time of our visit); and its system of 13 moons looks nothing like Uranus's. The second crescent at bottom is Neptune's largest moon, Triton, an enigmatic, geyser-streaked world. Again, this is a Voyager 2 image because it is the only probe ever to visit this part of the solar system. Voyager 2 captured this image on August 28, 1989. A return trip to Neptune will be even more difficult than to Uranus because of the planet's great distance. [Credit: NASA/JPL, with the original here.]

Crescent Comet (above) is a bit of a cheat, since it's not really a clean-looking crescent, but it's such a cool image I could not resist. This is a selfie-style shot taken last September by the Philae lander while it was still strapped to the Rosetta probe orbiting Comet Churyumov–Gerasimenko. The view here shows Rosetta's solar panels, with the double-lobed comet looming behind. At the time, the spacecraft was just 30 miles from the two-mile-wide comet. [Credit: ESA/Rosetta/Philae/CIVA, with the original here.]

We won't have to wait long for the next stunning crescent. When New Horizons speeds past Pluto in July it will take its own landmark look-back shots. Because of the difficulty of sending data across 4 billion miles, we may have to wait until fall for New Horizons to radio its view of crescent Pluto back home. I can pretty much guarantee it will be worth the wait.