The Eye-Popping Astonishment of Pluto 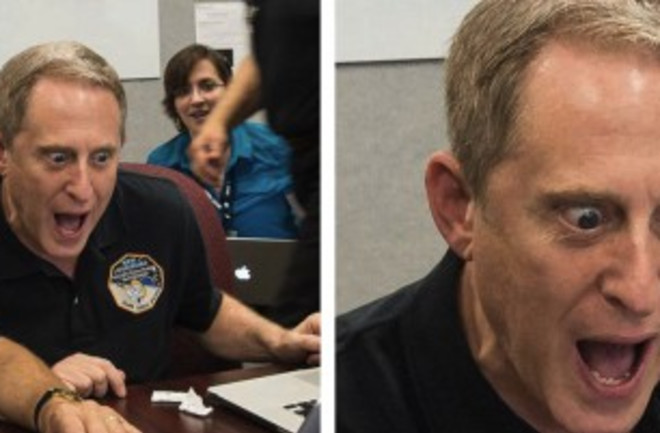 Alan Stern reacts to the early images of Pluto and Charon coming in from New Horizons. No further explanation necessary. (Credit: NASA/JHU-APL) I spent the past week at Pluto central--aka, the Johns Hopkins University Applied Physics Lab in Laurel, Maryland--watching images and data come in from the New Horizons spacecraft. You don't need me to tell you how incredible those first views are. They've been covered widely in the science media, including right here on this site, and have thoroughly (and gratifyingly) crossed over into the mainstream. I even got a chance to talk about them on Fox News. But there is a lot more to the story than the new landscapes of Pluto, stunning as they may be. First and foremost, there is the enormous amount of scientific surprise embedded within those images. Alan Stern, the principal investigator and prime mover behind New Horizons, routinely declared that we should all be prepared for surprises when we got a first look at Pluto. What he added, in his quieter moments, is that we should be prepared even for unpleasant surprises. Pluto might look just like Neptune's moon Triton. Worse, it might be an inert ball of ice, covered with ancient craters and decorated only with dark, carbon-rich discolorations. Of course, that turned out not to be the case. Stern's eye-popping reaction, shown up above, says it all. No, I take it back, not all. Stern was, and is, a Pluto obsessive and this mission was his baby. But I encountered many variants on his reaction at Pluto central. Ellen Stofan NASA's chief scientist, got misty-eyed looking at the just-revealed face of Pluto. "I don’t normally cry when I see planetary images. OK, sometimes I do, especially if it's Titan," she said. Jeff Moore of NASA's Ames Research Center explained that he had to remind himself to keep breathing. Fran Bagenal of the University of Colorado confessed that "we were jumping up and down looking at these images." Those responses demolished the stereotype of the detached, unemotional scientist. The reason for all the excitement is that Pluto and its large moon, Charon, are most emphatically not inert worlds. New Horizons has shown that Pluto has very few craters, meaning that some processes have been erasing them: The surface is dynamic and renewing. Planetary scientists have tossed around estimates that the surface is less than 100 million years old in places, but that is just a cautious way of saying "young." Nobody knows how often craters form in this distant realm of the solar system, so 100 million years is a rough upper estimate. Parts of Pluto's surface could be a million years old, or 100 years old. Parts of Pluto may well be active today.

Pluto's "heart" (left) is covered with frozen carbon monoxide on the left side. A detail (right) shows inexplicable ice mountains and smooth plains. The ruddy color comes from organic molecules strewn across the surface. (Credit: NASA/JHU-APL/SWRI, additional processing by Thomas Appéré) There are plenty of other signs of activity. At the bottom of the giant "heart" on Pluto (informally named Tombaugh Regio in honor of Pluto's discoverer, Clyde Tombaugh) is a range of 11,000-foot-high mountains. These must be composed of water ice, which is the equivalent of bedrock on Pluto; other abundant surface ices, including nitrogen, methane, and carbon monoxide, are not strong enough to support such strong peaks. Creating such giant ice peaks requires powerful tectonic forces of some kind. Where did those forces come from? "We're scratching our heads," says John Spencer of Southwest Research Institute. I heard that sentiment a lot over the course of the week. South of those ice mountains there is a stretch of enigmatic hills or hummocks and three depressions that look to me like eroded craters, all bisected by a long crack or fault. I ticked them off and asked Moore how he would interpret these features. "Your description sounds pretty good," he replied. Translation: Right now the scientists are mainly describing and cataloging the features. It's going to take time to interpret them. Another high-resolution Pluto image, released on Friday, shows a region of Tombaugh Regio to the north of the mountains. Here is a totally different landscape, an expanse of largely smooth plains interrupted by sinuous troughs and strange clusters of hills. The New Horizons team released an annotated version of this territory, provisionally named Sputnik Planum. The troughs are labeled "troughs," the hills are labeled "hills." Or as Moore puts it, "This terrain is not easy to explain." The area around Sputnik Planum has an unusual concentration of carbon monoxide ice, but it's not clear whether that is linked to the peculiar geology. The troughs might mark locations where the surface contracted, Moore notes, or they may be the result of convective motions driven by heat from below. It is too soon to tell. The one thing that is clear is that this is another region of active change, since there is no trace of craters.

Charon, Pluto's primary moon, shows unexpected signs of activity despite being just 1,208 kilometers wide, about 1/3 the side of Earth's moon. The dark polar cap may contain carbon compounds that leaked from Pluto's atmosphere. A closer look (right) shows even stranger details, including a weird "mountain in a moat"; the blocky lines are due to image compression. (Credit: NASA/JHU-APL/SWRI) Pluto's moon Charon produced equally eye-popping revelations. (In fact I'm pretty sure Stern was looking at Charon in that photo up top, though I haven't been able to confirm it.) Active geology on Pluto was a surprise. On Charon it was a downright astonishment, but there it is. As on Pluto, large swaths of Charon are crater-free, wiped clean by some kind of dynamic process. And as on Pluto, it is not clear what that process was or when it happened, except that it was recent in astronomical terms. Ahead of the flyby, Stern had promised that Pluto would "knock your socks off." At a press conference when the first detailed Charon image was released, Cathy Olkin of Southwest Research Institute riffed on that idea. "Charon just blew our socks off today," she gushed. "We kept going over the images: Look at this! Look at that!" The excitement runs deep, because the story here is about much more than Pluto. Planetary scientists are just getting to know the icy worlds of the solar system. Most of what they know comes from studying the moons of the outer planets, but by far the majority of the ice-rich bodies reside in the Kuiper Belt, the zone beyond Neptune that may contain 100,000 objects more than 100 kilometers across. Pluto is the largest and brightest member of that group and, so far, the only one that has been studied. Before Voyager visited Saturn, Uranus, and Neptune, the prevailing wisdom was that icy moons were likely to be inert and boring. Instead they turn out to be complex, active, and diverse. Two of them--Europa around Jupiter and Enceladus around Saturn--are now regarded as extremely promising places to search for alien life. The new scientific wisdom became that icy moons are dynamic because of their gravitational interactions with the giant planets that they orbit, but independent objects like Pluto might be the dullards.

Pluto's faces, revealed by New Horizons. These are just initial views. Most of the probe's dataset, including the highest-resolution views and full, uncompressed images, have not yet been received. (Credit: NASA/JHU-APL/SWRI, additional processing by Greg Smye-Rumsby) Now we know that is not true, either. If Pluto and Charon are active, it's a good bet that the same is true of many other worlds in the Kuiper Belt. In short, there is far more diversity, activity, and complexity in the solar system than anyone expected just a week ago. Nature continues to surprise us, and somehow it keeps surprising us in the good way (erasing Stern's fears to the contrary). When New Horizons flew past Pluto it completed the exploration of the nine classical planets, but only began the exploration of the solar system's outer zone. The fundamental question is what is driving the activity on Pluto and Charon. They are made of such fragile, low-temperature materials (those ices of nitrogen, methane, and carbon monoxide, for instance) that even the feeble energy of the distant sun, more than 5 billion kilometers away on average, is enough to vaporize some components of the surface and blow away bits of Pluto's thin nitrogen atmosphere. But something more profound is going on as well. Pluto's ice mountains and rippled plains, along with Charon's bizarre mountain-in-a-moat, indicate some deep-seated geologic processes at work. Thermal energy is the driving force of geologic activity, but such small worlds--Charon in particular--should long ago have lost the primordial heat of their formation. The small amount of radioactive material in their rocky interiors should not be able to generate sufficient new warmth. That brings us back to Moore and his head scratching. Nobody yet knows how to explain the features seen in the New Horizons images. One speculative idea is that an inner ocean of liquid water can keep even small ice worlds active for billions of years. Whatever the answer, the mysteries of Pluto are already leading science in new directions. The New Horizons images show that ice and frozen gas can be as dynamic as rock and lava, and that small bodies can remain active just as long as big ones, against all expectations. It may sound hyperbolic, but it is fair to say that our hard-won knowledge about how planets behave has been rendered instantly obsolete--or at least revealed as woefully incomplete. In my next post, I'll talk about what comes next. In the meantime, there are already plenty of eye-popping revelations to ponder.

[Special thanks to Jon Keegan for coming up with the concept of the "enhance" zoom on Alan Stern's eyes.]