The Extreme Origins of a Fast Radio Burst 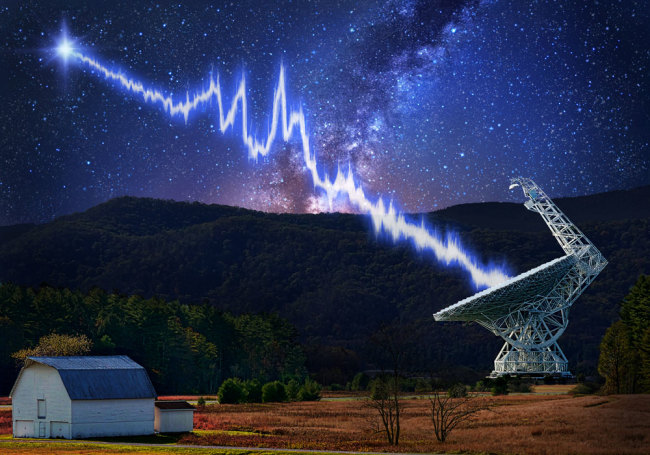 Fast radio bursts (FRBs) are one of the few truly mysterious phenomena in the universe. Astronomers first noticed the milliseconds-long intense pulses of radio waves in 2006, and we’ve slowly but steadily been learning more about the extragalactic signals ever since. We still don’t really know exactly what they are, but thanks to a study published Wednesday in Nature (in fact it’s the cover story), we’re finally starting to understand these strange signals.Do the Twist Now, a caveat: This finding only concerns one type of FRB, and really just one specific example. The source, known as FRB121102, is the only known repeating FRB, and just last year astronomers pinpointed its location to a dwarf galaxy about 3 billion light-years away. This distance actually underscores how powerful the bursts have to be, since they have to cover such a huge distance to get to us — just a single millisecond of energy in one of these bursts is equivalent to all the energy the sun releases in a day. The new research, based on observations from the Arecibo Observatory in Puerto Rico and confirmed by the Green Bank Observatory in West Virginia, analyzed the polarization of FRB 121102’s radio waves, more or less looking at how the radio waves lined up. The international team of astronomers saw that the FRB signals had been “twisted” significantly thanks to an effect called “Faraday rotation.” Basically, the radio waves must have passed through an area with an exceptionally strong magnetic field to account for the amount of twisting they saw. The only regions we know of that could produce such a strong twist are the most extreme, nearby a massive black hole. It’s also possible that a highly magnetized nebula (a loose cloud of gas and dust) could produce the effect, or even a supernova remnant, the leftovers of an exploded star. The team further speculates that, based on the data they collected, FRB 121102 could be a neutron star, based in one of these punishing environments. Not So Fast Of course, that’s not to say we have all the answers. We still don’t know what causes the pulses themselves, assuming the risk-loving neutron star assessment is even right in the first place. And, back to that caveat, does this explain all FRBs, or just the repeating kind — of which the only known example is FRB 121102? Luckily, we’re likely to get much more data throughout this year. New telescopes coming online should detect multiple FRBs every day, hopefully shedding more light on the mysterious emissions. With any luck, we’ll have answered many of these questions, and surely found many new ones, by this time next year. But it’s amazing that, only about 12 years after discovering FRBs in the first place, we’ve been able to learn so much about them. The more we gaze into the stars, the more we realize how little we know about them.