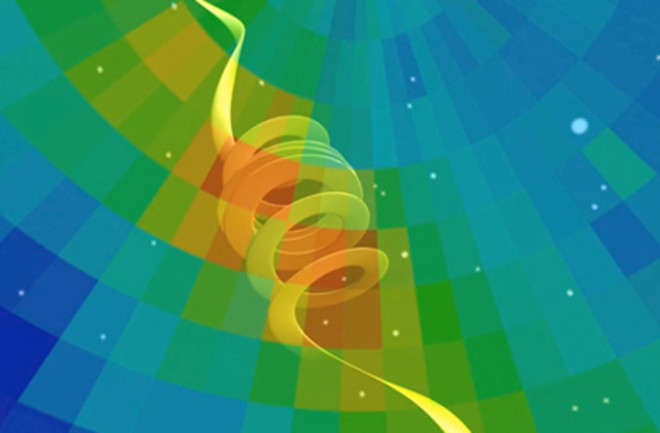 The edge of the solar system is not some static line on a map. The boundary between the heliosphere in which we live and the vastness of interstellar space beyond is in flux, stretching and shifting more rapidly than astronomers ever knew, according to David McComas. McComas and colleagues work with NASA's Interstellar Boundary Explorer (IBEX), a satellite orbiting the Earth with its eye turned to the edge of the heliosphere—the bubble inflated by the solar wind that encapsulates the solar system and protects us from many of the high-energy cosmic rays zinging across interstellar space. This week in the Journal of Geophysical Research, the team published the results of IBEX's second map of the region, and found that its makeup has changed markedly over the span of just six months. Says McComas:

"If we've learned anything from IBEX so far, it is that the models that we're using for interaction of the solar wind with the galaxy were just dead wrong." [National Geographic]

The first IBEX look out toward the end of the heliosphere revealed what McComas calls a long ribbon of neutral atoms that seems to encircle the solar system, with a "knot" of them bunched up together, seen in the illustration above. Six months later the "knot" has unwound, apparently diffusing along the length of the ribbon. Why would it change so fast? A logical answer, McComas says, is that it's connected to the activity of the sun, and the sun's behavior can change relatively quickly.

McComas also notes that the sun’s magnetic field, which fills the heliosphere and might be expected to have something to do with the knot’s appearance, has an 11-year cycle. He suspects that the fading knot may be related to the unusually quiescent solar cycle that just ended and the shrinking of the heliosphere due to the reduction of the solar wind during that time. [Science News]

Researchers want to understand the sun-heliosphere relationship better not only because it's neat to find out how our solar system works, but also because it could affect future astronauts trying to boldly go where no one has gone before.

A smaller bubble makes a worse shield, McComas added. As the heliosphere shrinks, more galactic cosmic rays can make their way into the inner solar system. That could prove critical for astronauts spending months in transit to other parts of the solar system, like Mars or a nearby asteroid, he said. [Wired.com]

On long space trips, radiation in the form of those cosmic rays would pose a health risk

to astronauts. Scientists and engineers haven't yet figured out how to protect space travelers from this radiation, although some novel approaches

have been suggested. IBEX is on a planned two-year mission. If NASA extends its life, the explorer could watch to see if the ribbon changes as the sun's activity picks up again. As we noted with the plans to launch the Solar Probe Plus mission

, there's a lot we still don't know about the sun. And because the heart of the solar system, the sun, and the edge of the solar system are deeply interconnected, learning about one could lead to revelations about the other. Related Content: 80beats: Solar Winds Drop to Lowest Recorded Level, Probe Finds

, on the IBEX launch 80beats: NASA Probe Will Head to the Sun, Withstand 2600-Degree Heat

80beats: The Real Problem With a Human Trip to Mars: Radiation