The Dogs of Sun

I forgot to post about this! The other day, after the fam and I were out watching "I Am Legend", we saw a sundog, a bright feature in the clouds caused by ice crystals bending sunlight. I've written about these zillions of times. This one was different though. When I first saw it, I thought it was the Sun! There were low clouds on the horizon, and it looked like the Sun was trying to break through them. But then I saw the actual Sun, quite a bit to the left! It was amazing. The sundog was so bright I could hardly look at it. When I put my polarizing sunglasses on, the glare went away and I was treated to a spectacular rainbow of colors where the sundog was. It was far and away the brightest one I have ever seen. I'm still kicking myself for not having had my camera with me. Update: my bro-in-law Chris just told me he got a shot of it with his phonecam! So here it is. The sundog is on the right (partially behind the light pole), and the actual Sun on the left. This was when the sundog had already started to fade. 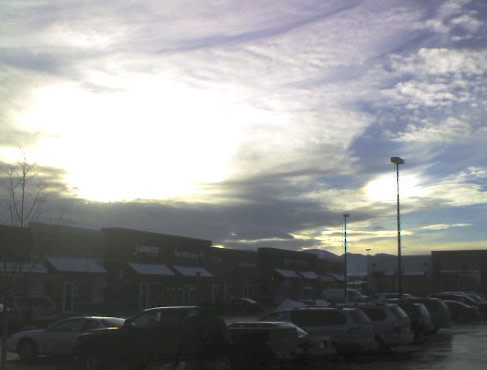 In olden times, sundogs were called "the false Sun". I never understood why, until this week.