A strange old galaxy churns out new stars like a young'un. 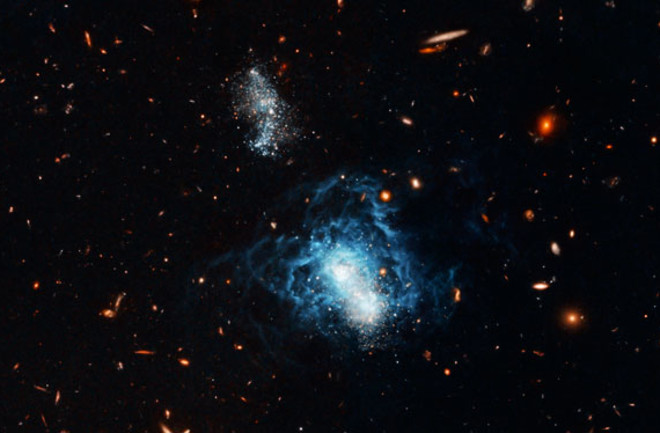 Although their lifetimes span billions of years, galaxies age, just like people. As rambunctious young’uns, they undergo bursts of star formation that create hot blue orbs out of the simple elements hydrogen and helium. As galaxies grow older, they settle down. Not only do their stars cool and become redder, but they eventually burn out and die, releasing into the galaxy heavier elements that formed in the stellar furnaces.

So astronomers have been repeatedly baffled by a peculiar, developmentally challenged galaxy called I Zwicky 18. When they first sighted it about 40 years ago, they thought it was a not-quite-billion-year-old toddler brimming with hot young stars, full of hydrogen and helium and possessing very few heavy elements, called metals. Finding such a young galaxy near others that are at least 7 billion years old thrilled—and perplexed—the scientists. But new observations from NASA’s Hubble Space Telescope have revealed ancient stars mingled with the young ones, proving the galaxy as a whole is in fact as old as its neighbors.

Astronomers don’t know why this galaxy is so low on metals, or why it’s forming so many new stars so late in the game. It’s possible that this relatively light galaxy has too little mass—or gravitational pull—to retain the metals, and that a rush of gas called a galactic wind swept them away. Or maybe the galaxy’s relatively isolated position caused it to develop slowly: There are few other galaxies around to help seed star formation.

They also don’t know why it’s not happening in all dwarf galaxies. “It’s possible that there are more out there like this,” says Francesca Annibali, an astronomer at the Space Telescope Science Institute in Baltimore, who worked on the project. “If they are more common, then that means that some process is inhibiting star formation in small, low-metal environments.” Whatever the cause of I Zwicky 18’s strange history, its close resemblance to primordial galaxies offers a unique opportunity to study how stars acted in the early universe, something that normally cannot be observed at such close range.