The Curious Coupling of Science and Sex

Yesterday Chris invited readers to discuss C.P. Snow's The Two Cultures here at The Intersection. Of course I'm in favor of the idea having basically had Collini's edition attached at my hip as we composed Unscientific America. So not to steal his thunder, but I have an alternative suggestion related to my next book... 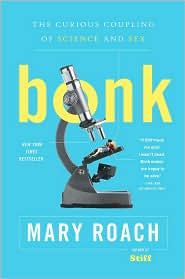 Who's interested to discuss Mary Roach's Bonk: The Curious Coupling of Science and Sex? Here's an excerpt from Publishers Weekly:

"Roach's forays offer fascinating evidence of the full range of human weirdness, the nonsense that has often passed for medical science and, more poignantly, the extreme lengths to which people will go to find sexual satisfaction."

And so while I'm in no way discouraging a 'book club' about everyone's favorite lecture from nearly 50 years ago in Cambridge, who wants to explore what the NYTimes describes as a 'greatly satisfying romp'?