The Cosmos’ Most Powerful Magnets May Form When Stars Collide 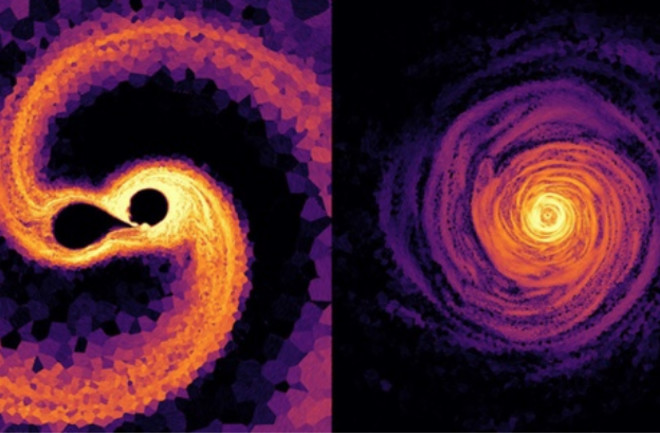 More than 60 years ago, astronomers realized about 10 percent of massive stars have powerful magnetic fields bursting from their surfaces. But the exact origins of these magnetic fields —which can reach hundreds to thousands of times the strength of the Sun’s — has so far remained a mystery.

The answer, it turns out, may be due to a collision between two normal stars.

A team of scientists recently used cutting-edge simulations to uncover an evolutionary path they think explains the formation of extremely magnetic stars. And as a cherry on top, their findings may also shed light on the origins of a slew of other astronomical oddities. These mysteries include magnetars (a rare type of hyper-magnetic neutron star), blue stragglers (massive stars that appear too young for their age), and maybe even enigmatic cosmic events like fast radio bursts and super-luminous supernovae.

The research was published October 9 in the journal Nature.

When two stars collide, it sends their surfaces spinning and simultaneously kicks off enormous amounts of turbulence. This dramatically boosts the final star’s magnetic field.

But the new research doesn’t just describe how colliding stars can form insanely magnetized stars, it also may explain the origins of a bizarre class of strange objects called blue stragglers.

Blue stragglers are a unique class of stars that masquerade as stars younger than they truly are. These “rejuvenated” stars are much hotter — making them bluer — and brighter than your average main-sequence (or middle-aged) star of a similar apparent age.

But what is the fountain of youth that keeps blue stragglers looking so fresh? A leading theory is that merging with another star will do the trick. And this new research supports that notion.

First off, typical main-sequence stars power themselves by fusing hydrogen into helium in their cores. But when the hydrogen in their cores runs out, they move on to fusing concentric shells of hydrogen around their now-inert cores. This causes the star to balloon up into a red giant, moving it off the main-sequence and into the so-called red giant branch.

But if two main-sequence stars collide, their material gets mixed together. The resulting merged product now has a restocked reservoir of hydrogen in its core, which allows it to chug along as a more massive — yet still main-sequence — blue straggler instead of evolving into a red giant.

“This just means that post-merger stars have more nuclear fuel to then live longer,” Schneider says. “In other words, their internal clock has been set back.”

But that only makes the newly formed star appear younger. “The point is simply that the blue straggler could have lived for a long time as lower-mass stars and then merged to become this more massive blue straggler,” Schneider says. “It’s high mass fooling us into thinking it must be younger.”

Scientists first suggested a collision between two stars could generate strong magnetic fields more than a decade ago. “But until now, we weren’t able to test this hypothesis because we didn’t have the necessary computational tools,” said co-author Sebastian Ohlmann of the computing center at the Max Planck Society near Munich in a press release.

But thanks to the powerful AREPO simulation code, the researchers were finally able to show that two merging stars, which originally lacked much magnetism, can join forces and create a new, highly magnetize star with a face lift.

According to the study’s abstract, “This can explain the properties of the magnetic ‘blue straggler’ star τ Sco,” which is located less than 500 light-years away in the constellation Scorpius. Because τ Sco has an apparent age of less than five million years, while its birth cluster appears to be closer to 10 million years old, the researchers think the oddball star may be a prime example of what stellar mergers can produce.

But that’s not all.

The study’s abstract goes on to state: “Such massive blue straggler stars seem likely to be the progenitors of magnetars, perhaps giving rise to some of the enigmatic fast radio bursts observed, and their supernovae may be affected by their strong magnetic fields.”

Magnetars are a rare breed of neutron stars with absurdly powerful magnetic fields that reach some 5 quadrillion (one quadrillion is 1,000 trillions) times stronger than Earth’s. “Magnetars are thought to have the strongest magnetic fields in the universe,” said co-author Friedrich Röpke of the Heidelberg Institute for Theoretical Studies in a press release.

“We are suggesting that magnetars could be the natural end product of [main-sequence] and probably also pre-[main-sequence] mergers,” Schneider says. “The biggest and yet-unsolved question is whether the magnetic field produced in the merger can survive up to the supernova stage, and then whether the magnetic field is indeed maintained in the forming neutron star when the core of the star collapses.”

“This still needs to be seen,” Schneider says, “but I think our suggestion is a very promising channel to finally understand the origin of magnetars and their strong magnetic fields.”