The Coral Microbiome May Offer Protection in Warming Seas 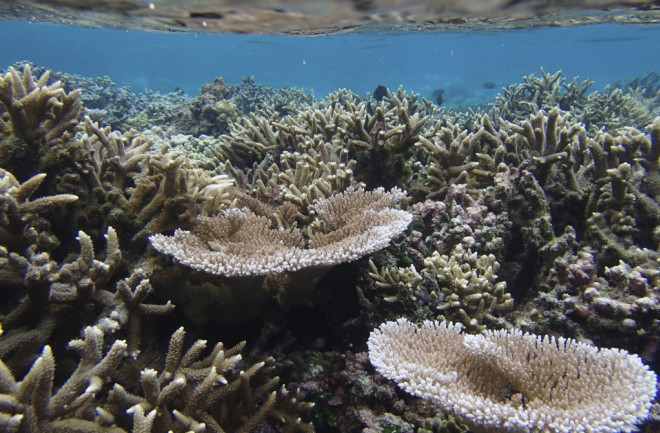 Corals, like these in American Samoa, could be protected by their microbiome. (Image: Zack Gold and Lupita Ruiz-Jones) Ofu Island – a speck of land emerging from the southwest Pacific Ocean – is a textbook paradise. Jagged, forest-covered peaks rise steeply from palm-fringed white sand beaches, as colorful birds sound off in the distance. But beneath the waves, it’s a different story: Ofu Island’s coral reefs are suffering. As temperatures in some lagoons eclipse 35 °C on a daily basis, extensive coral bleaching is leaving a graveyard of rocky, spindly skeletons reaching into the warming water. Corals are multipartate symbioses, made up of two eukaryotic partners. Corals like Acropora hyacinthus – the dominant species at Ofu Island – enable calcium carbonate precipitation to form reefs; algae such as Symbiodinium take advantage of the real estate while providing the coral with photosynthetically-derived food. When temperatures get too high, the algae take off, leaving the severely compromised coral to fend for itself. Warmer water isn’t inherently a problem: corals could almost certainly tweak their proteins and cellular structures to deal with the heat and retain their symbionts. But coral genomes change slowly, over centuries or millenia, and the Acropora of American Samoa don’t have that kind of time. Maren Ziegler, a postdoctoral fellow in Chris Voolstra’s research group at the King Abdullah University of Science and Technology, thought that there might be a more immediate fix: the coral microbiome, a microbial coat of armor that could offer thermal protection on short notice. To test this idea, Ziegler’s colleagues traveled to Ofu Island in American Samoa – hazard pay was not forthcoming – and started moving corals around. By transplanting corals between pools with more moderate thermal variability (MV) and more extreme temperature swings (high variability, HV), the team hoped to determine if the microbiome changed, and if the corals could be made more resiliant to heat stress. “Ofu Island is a special place,” says Ziegler, “because it’s a well-studied reef system where many important findings in coral research have been made. It’s a privilege to be able to conduct research in these locations.” After 17 months in their new habitats, the corals’ microbiomes changed dramatically. For both shifts – from MV to HV habitats, and vice versa – transplants’ communities were statistically indistinguishable from native corals. HV samples were dominated by Alteromonadaceae, Rhodospirillaceae, and Hahellaceae; MV corals, in comparison, exhibited a striking lack of Rhodospirillaceae and Spirochaetaceae, among other families. And these microbial communities didn’t vary in any significant way based on the host coral genotype, suggesting that the key determinants of microbial structure operated on a coarser level, dictated by broader environmental parameters. After the 17-month transplant, some corals were subjected to a heat stress experiment, as water was heated from 29 to 35 °C over the course of three sweltering hours. Those that had spent the last year and a half in the MV pool – regardless of their initial provenance – suffered more, bleaching beyond repair and losing substantial diversity from their microbiomes. The microbial community differences were clear, but what exactly did they mean, and could they be harnessed to protect corals? These steps – from phenomenology to causality and ultimately predictive intervention – are challenging for microbiome research efforts, given the enormously complex interactions occurring on the microscale. To begin to address these questions, Ziegler and her team examined the genes that were upregulated under each thermal condition. They found 23 genes that were more prevalent in the HV microbiomes, genes that pointed to carbohydrate transport and metabolism. Intriguingly, heat-stressed corals have been shown to produce sugar-rich mucus: if bacteria are able to take advantage of these secretions, it seems, corals may be better positioned to retain their microbiota and fend off bleaching. The relational details among coral, alga, and the diverse microbial community remain fertile ground for future research, but Ziegler’s results are ecologically compelling and potentially actionable. “All animals and plants are so-called metaorganisms that rely to some extent on their associated bacteria,” Ziegler notes. “The interesting question to ask is whether the corals and the bacteria merely respond to the same stress in their environment, or whether the bacterial community may influence the heat tolerance of the coral host.” A seemingly complete transformation – in both community structure and physiological effects on the host – was possible in just 17 months. As for the next steps, “we have identified some candidate bacteria that may directly contribute to heat tolerance of the coral, and are investigating these more closely now,” says Ziegler. “Experimentally, this can be achieved by showing that the coral without the bacterium is more heat sensitive and that the coral associated with the bacterium becomes more heat tolerant.” If such causal links can be clarified, these findings open the door to a microbial “booster shot” for susceptible corals. The idea that microbiota can confer useful characteristics upon a host organism isn’t new, of course, but its potential application to an organism as foundational, as biome-defining, and as threatened as corals is an exciting development. If it works, scientists like Ziegler could be able to turn Ofu Island back into paradise, above and below the waves.