The Boston Globe's Big Picture section is rapidly becoming my favorite site on the web. It features dazzling hi-res photos with various themes. They've done it again this week: hurricanes, as seen from space. 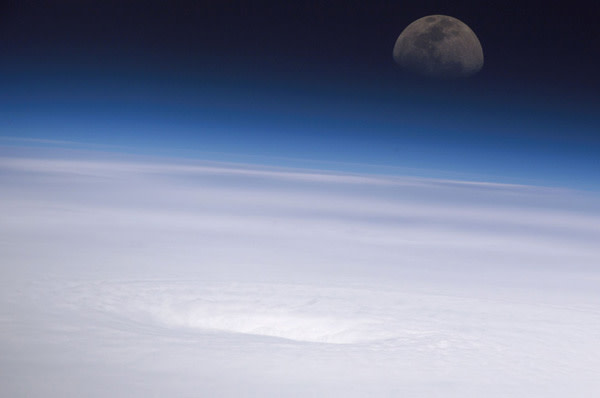 That's hurricane Emily and the Moon, as photographed in 2005 by an astronaut on board the International Space Station. There are lots more there for you to gawk at. ... and it reminds me how miserly Nature is with shapes. Hurricanes look a lot like cream stirred into coffee, and the physics is similar. However, spiral galaxies are spirals for an entirely different reason. But to our eyes, they bear a striking resemblance. Their symmetry, their composition, their apparent grace all lend themselves for us to be awestruck... but for hurricanes, on a closer scale, they are truly frightening. With Ike currently bearing down on the Gulf coast, it's good to remember that beauty from afar can be deceiving.