The Beautiful Science of Helicopter Halos

Earlier this week I was on Fox News' morning news show Fox and Friends to talk about the most beautiful thing I have ever seen in a war zone, and the fascinating science behind it. When a helicopter descends into a sandy environment, it creates a brilliant halo that is a stark contrast to the solemnity of battle. But scientifically, what are these miniature galaxies adorning helicopter blades? You can watch my segment below for all the details behind amazing photos like the ones below*. [Link also here]

Watch the latest video at video.foxnews.com

Apart from the curious physics, helicopter halos also have a touching story behind them, which I covered a few weeks ago in the great new online science magazine Nautilus and it's what I based the Fox News appearance on. For much more information on the Kopp-Etchells effect and helicopter halos, be sure to check out the rest of the story there. I have excerpted the first two paragraphs below:

One of the most beautiful things you’ll ever see in a war zone had no name, until it was given one in honor of two soldiers who gave their lives.

Benjamin Kopp, a US Army Ranger, and Joseph Etchells, a British soldier, were killed in combat in Sangin, Afghanistan, before they were old enough to easily rent a car. Each of them had probably seen what happens when a helicopter descends into a sandy haze before; they had most likely ridden in one that was producing the show of curious physics. Thanks to one photographer, their names now adorn the dazzling effect produced by helicopter blades hitting sand and dust. If the conditions are just right, you’ll see three halos on a military helicopter—the Kopp-Etchells Effect.

You can read the rest here.

Working in tandem with the courageous photographer who actually took these amazing photos--Michael Yon--I am also fortunate enough to have a whole gallery of helicopter halo photos to share: 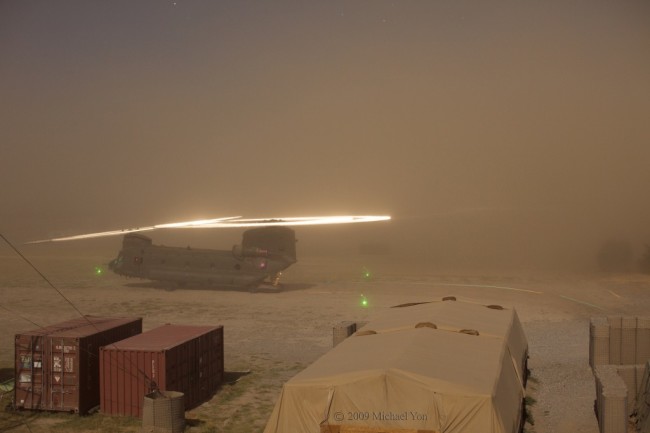 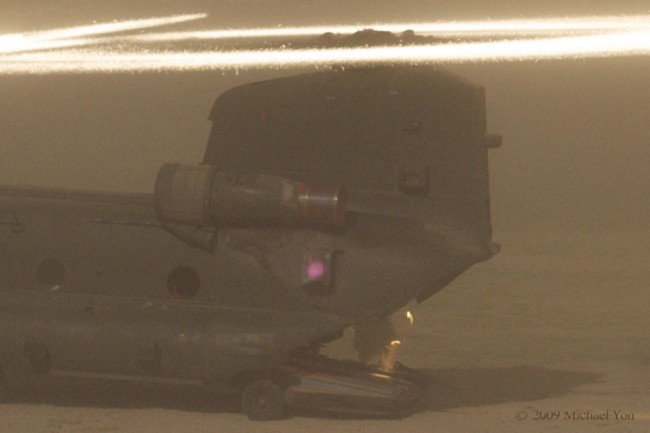 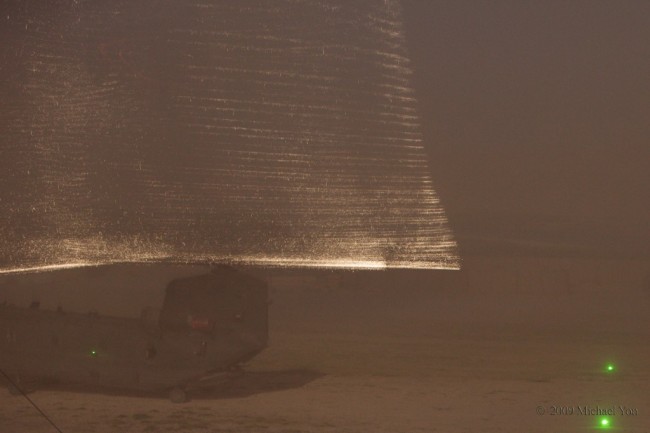 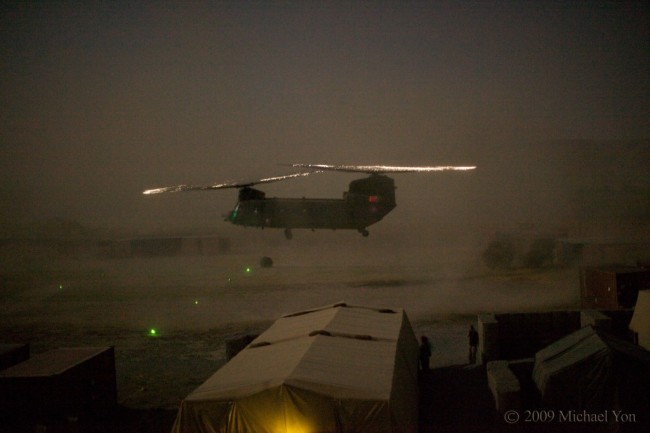 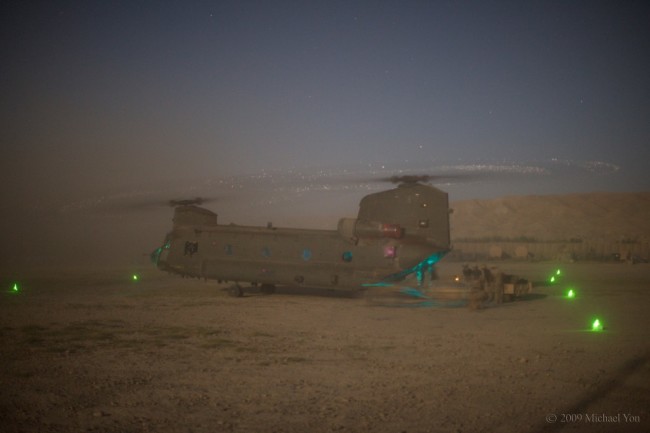 Aside from the human interest story and the physics, there seems to be a genuine confusion among pilots, photographers, and engineers as to what is happening here. Static or piezoelectricity is another popular candidate for the helicopter halos--as opposed to the pyrophoric, muffler-scraping-on-the-road phenomenon I describe in the video above. Yon has informed me that former general and commander of US forces in Afghanistan, David Petraeus, mentioned to him personally that he thought static electricity was to blame. Even the usually spot-on host of RadioLab, Robert Krulwich, gives credence to the electricity-based theories.

But these theories have very little support.

What got cut out of the Nautilus article is that we actually know that the Kopp-Etchells effect can't be static. If you do supersonic testing on metal that is not susceptible to the "pyrophoricity" that I described in the video clip--but still conducts electricity--the Kopp-Etchells effect disappears. I've had engineers contact me saying that they have done testing at NASA that proves this point.

There could be piezoelectric effects going on, as many suggest, but I highly doubt it. Those effects are a generation of electric current from the bending or impact of a material--usually a crystal like quartz. But again, if the helicopter blades aren't pyrophoric but do conduct electricity, the whole effect disappears. This would be the best time to see an electricity-based effect, but nothing happens. It kills the theory. Also, piezoelectricity usually creates small voltages. It is nowhere near strong enough to produce what we see. It's true the piezoelectric effects can produce sparks; that's how an electric lighter works. But making a shower of sparks would take hundreds of thousands of volts, and even then an electrical discharge looks nothing like the sparks we see in the photos. If it was electricity--static or piezo--it would look more like a lightning storm, not sparks from an angle grinder.

No matter what is going on, the effect is real enough to have real implications. According to the military personnel Yon has spoken with, the halos are beautiful, yet problematic--they provide target lights for enemy. The glowing light can also cause problems seeing via night vision equipment and therefore landing problems. Long term, the Kopp-Etchells effect damages the sensors in pilots' night vision gear. And of course, constantly taking off and landing in sandy environments causes significant rotor damage.

Helicopter halos are some of the most wondrous shots I have ever seen, and I think they are even more so once understood. To quote one of the anchors from my Fox News appearance, "Who knew science could be so beautiful?"

*This was my very first TV appearance, which explains my youthful enthusiasm.