The Beautiful Patterns Left Behind When Whiskey Dries

Scientists can tell where whiskey came from by the patterns it creates. 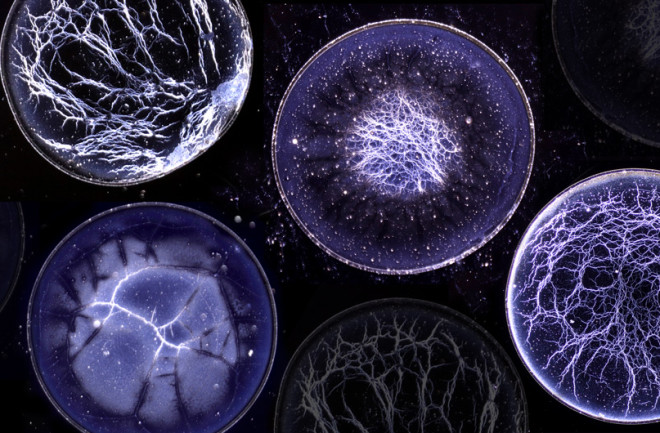 (Inside Science) — It started with a sabbatical and a case of whiskey. Time away from the usual research and teaching responsibilities — and a bit of inspiration. University of Louisville mechanical engineer Stuart J. Williams wanted to learn more about how particles and fluids interact, which is called colloid science. And just before he was set to spend some time working with an expert in the field named Orlin Velev, Williams talked to a colleague at the Kentucky-based beverage giant Brown-Forman, who mentioned that whiskeys happen to contain colloids. Thus a project was born.

The continuation of that research, published in March in the journal ACS Nano, shows how it's possible to identify certain American whiskeys using the patterns left behind when they dry up.

There are thousands of chemicals in whiskeys, said Williams. This is why different whiskeys can have such a variety of flavors. But because most American whiskeys — including bourbon — are aged in charred oak barrels, they contain certain colloids that leave strange and beautiful patterns when the water and alcohol evaporate.

You can't just pour out a bottle of whiskey and let it dry to get these patterns — "a waste of whiskey," according to Williams. He takes a tiny drop of diluted whiskey — one millionth of a liter — and applies it to a material so that it beads up like rain on a windshield. That makes the colloids join together.

"Those colloids get to the surface and form a thin skin, a chemical skin on the surface," said Williams. "And then when the droplet evaporates, that skin buckles and it folds and twists."

That process leaves what Williams calls a "whiskey web." Researchers can repeat the steps and observe distinctive patterns appearing again and again for each type of whiskey. In the process, they're learning details about how whiskey ages, and about thin chemical layers, insights that could be applicable to biology, he said.

For anyone who wants to try to their hand at whiskey-fueled colloid science, Williams has shared some tips for making the weblike patterns at home.