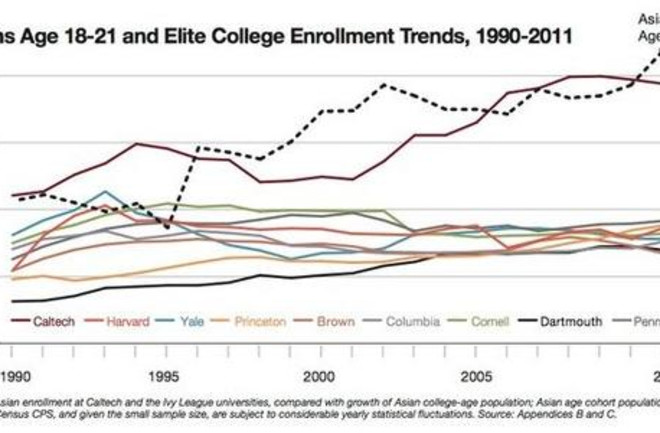 The Myth of American Meritocracy, Ron Unz A recent conversation I had with a friend whose parents are immigrants from Germany made me reconsider and reflect on the power of implicit information in shaping one's life; that information being culturally mediated. Though my friend was raised in the United States, because of her parents' immersion in the German expatriate community her upbringing was very bicultural. In fact, she is much more German than I am Bangladeshi. Despite the fact that to anyone who is a Baby Boomer or older she looks American, and I do not, there are many similarities in outlook due to our 1.5 generation background. Both of us are from families where graduate educations in the sciences are the norm. We succeeded in academics and pursued higher education without much effort or obstacles. This is not a story of overcoming the odds in a conventional sense.

In explicit terms we are entirely American, but there are nevertheless implicit aspects of being American of a particular social class which we had to experience after leaving home at 18.

This brings me back to the issues which were highlighted in Ron Unz's recent piece in The American Conservative, The Myth of American Meritocracy (note: I was an Unz Foundation Junior Fellow between February 2007 and February 2012). You can see further discussion of the topic at The New York Times, as well as Unz's weblog. Steve Hsu has also been discussing the results as well. My primary focus here is not going to be on the article itself. I broadly accept many of the empirical findings. The chart above shows to me that it is clear there has been implicit collusion between Ivy League universities in regards to the proportion of people of Asian ancestry who attend these institutions. In hindsight it should not be too surprising. I commend you to read Austin Bramwell's perspective in the Top of the Class, where he outlines exactly how elite prep schools cooperate with the admissions offices of Ivy League universities to perpetuate the pipeline which maintains the generations of the customary American gentry (of which he is a member). Institutions like Harvard exist to shape the nature of the American ruling class. It makes sense that they would be keen toward particular demographic considerations. I am personally not particularly pleased as the prospect of racial quotas, but then again my image of an "elite university" is that it should be elite in scholarly terms, rather than as a finishing school for the next generation of America's rulers (and I have no interest in the types of demographic diversity which are of concern for most). But I am not the dictator of this world, and I am rather confident that no matter what the Supreme Court rules in the near future, a de facto quota system will continue, with some marginal modifications, at private universities for the indefinite future. The American ruling class, whether it be intellectuals, politicians, or corporate executives, favors some form of affirmative action and diversity, and I am convinced that they will get their way, no matter legal obstacles or populist sentiments. Reality is what it is, and it is on the matter of transparency, and explicit comprehension, where I think we need to make our stand. There are many people who have long been aware of the "Asian quota," or the fact that "holistic admissions" serve to allow particular universities to modulate their demographic outcomes appropriately. But not everyone is aware of this. I am thinking, for example, of a friend who was raised by a single mother. He happens to be 1/4 Asian in ancestry, and when applying to elite private universities he made sure to put "Asian" as his race, under the false assumption that being a minority would aid his chances of admission. Raised by a white single mother he was not in a milieu where the "real rules" on what counts, and doesn't count, as a minority, were understood. We live in a system where the child of Korean shopkeepers is not an underrepresented minority, while the child of a Venezuelan doctor most certainly is. Similarly, when elites talk about "diversity," it is implicitly clear that this alludes to very particular and specific demographic diversities. Race, sex, and the reality of some ancestry derived from Latin America most certainly. Our modern elites may give a rhetorical nod to socioeconomic diversity, but there will never be any substantive action in this direction which might jeopardize the chances of their own children ascending the ladders of power. The extant scholarship on elite university admissions suggests that non-Hispanic whites who are below the middle class are extremely underrepresented at elite private institutions, but there is no prospect to my knowledge that this deficit in the texture of the future ruling classes will be addressed. This is just understood by all who count, and requires no great public discussion. Success in life in the United States today demands that you understand the implicit and subtextual filaments which thread their way through the American cultural landscape. My daughter is an Asian American because her father is an Asian American (thanks to the reclassification of South Asians as Asian Americans in 1980). But the reality is that her physical appearance strongly favors her Northern European heritage. With that in mind we quite consciously gave her a series of names which allowed her own ethnic identity to be optional and situational. As I have no great emotional interest or preoccupation with collective identities I feel no pang of guilt or regret about this. The world is a bureaucratic machine, and there are those born who understand that the machine must be manipulated, and those who allow themselves to be tossed about by its machinations. If you don't have a cynicism and mercenary attitude toward the machine, you will be consumed by it. The children of the American elite take the machinery for granted by dint of the implicit cultural wisdom they receive with their mother's milk. The machine will always load the die so as to favor then. Those who are outside can only even the odds through information, and being better than those who are to the American manor born. Of course there are many serious issues to address in regards' to Unz's piece. Many point out that perhaps there are rational reasons to discount the academic successes of Asian Americans (i.e., are these tests truly representative of intellectual vigor and curiosity?). But these honest discussions can only be had once honesty and transparency is the foundation and starting point. Until then we will continue to muddle on, trying to make sense of a complex world.