The Arrow of Time in Scientific American 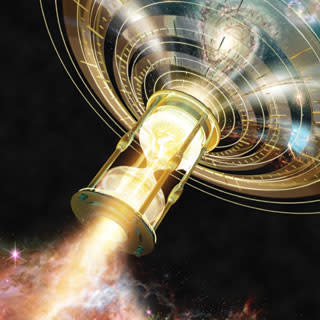 Greetings from Paris! Just checking in to do a bit of self-promotion, from which no blog-vacation could possibly keep me. I've written an article in this month's Scientific American about the arrow of time and cosmology. It's available for free online; the given title is "Does Time Run Backward in Other Universes?", which wasn't my choice, but these happenings are team events. As a teaser, here is a timeline of the history of the universe according to the standard cosmology:

Despite appearances, this really is just the standard cosmology, not some fairy tale. I just chose to tell it from the point of view of a time coordinate that is oriented in the opposite direction from the one we usually use. Given that the laws of physics are reversible, this choice is just as legitimate as the usual one; nevertheless, one must admit that the story told this way seems rather unlikely. So why does the universe evolve this way? That's the big mystery, of course.