That such a place exists

Mrs. BA, The Little Astronomer, and I just returned from a too-short but amazing trip to southern Oregon. We went for a variety of reasons, but I know that for years to come, it's what I took back that will stay with me. Saturday, we drove from our hotel in Ashland to Crater Lake. It was a two hour drive through gorgeous mountains and magnificent standing pines, and it was uphill all the way. A brief stop at the Crater Lake visitors center revealed what looked like a sheer cliff a few hundred meters away, imposing and looming. We had been driving uphill for some time, but this cliff -- the rim of the crater -- still towered over us. It was daunting. The drive up to the rim itself was brief. When we rounded the last hairpin turn, the crater lay before us. There is no possible way to describe the vista and give it even a hint, a taste, of the grandeur it elicits. The beauty is palpable, almost a physical thing you can touch. I stood in awe, soaking in the view.

But then, incredibly, things got better. There is an overlook carved into the side of the rim, which sports a room with a small museum and a series of signs describing the view, pointing out details and giving a geological history of the lake. If you haven't been there or read about it, let me take a moment to walk you through this slice of recent events. Over millions of years, the northwest region of the United States was built up due to forces that lie beneath. Pressure due to magma pushed on the crust, leveraging it upwards, bulging it. In many places, this pressure created volcanic mountains. Mt. Mazama was among the royalty of these mountains. It stood at over 3300 meters (11,000 feet), a magnificent stratovolcano. Underneath it was a magma chamber, a vast seething cauldron of molten rock. In some such chambers the magma is thin and quiet, relatively benign. But in others, the magma is thick, viscous, trapping dissolved gases which can tremendously increase the pressure inside the chamber. Under Mazama, the magma was of the latter type. The pressure built over centuries as more and more magma filled the chamber. The chamber expanded and rose. Mazama underwent a series of eruptions over several tens of thousands of years, trying to relieve the pressure. But still, pressure climbed. Finally, after all those eons, the rock comprising Mt. Mazama that sat above the chamber could no longer contain it. 6800 years ago, the volcano violently erupted. Ash and rocks from the catastrophe rocketed into the air, and on the north side a pyroclastic flow -- a tsunami of superheated rock and ash -- thundered down the side of the mountain at hundreds of kilometers an hour. At two kilometers thick and hundreds of meters deep, it cut through the landscape like a hot knife through butter. Any animal in its way would have had only a few seconds of sheer terror before having its life stripped away. All told, a cubic kilometer of ash slammed its way down the mountainside. Even after such violence as this, Mazama settled down. The eruptions ended, and the ash cooled, and no doubt a cap formed over the vent. But it was only a respite. A hundred or so years later, the final act began, and it was as sudden as it was devastating. The volcano exploded. Not erupted, exploded. The pressure of the subterranean magma could no longer be dominated by the weight of the rock above it, and it exploded upward. A column of rock and ash over a kilometer wide punched up through the atmosphere, reaching heights of 15 kilometers or more. The energy is estimated as more than 40 times the Mt. St. Helens event of 1980, as ash blew outward from fractures all around the volcano's rim. As if this weren't enough, the finale was yet to come. The fuel for the explosion was the magma beneath the volcano, and with the explosion the chamber was partially emptied. But it was the pressure from that magma that had been supporting the volcano. With the support gone, a vast amount of rock ten kilometers -- six miles -- across collapsed, sending gigatons of rock falling down, inward into the magma chamber. When the central peak collapsed, the height of the mountain was nearly halved, dropping from 11,000 feet (3300 meters) to about 7000 feet (2100 meters). The sheer force of this event is beyond human comprehension. It was equivalent to a 900 megaton blast, 900 million tons of TNT exploding! What must the native Americans of the time thought, seeing such a thing? Ash from the explosion covered the northwest, reaching as far north as Canada and as far east as Nebraska. Finally, again, as it had so many times before -- though never after this grand a scale -- the volcano mostly subsided. The ash and lava cooled, and the mountain took on its present repose. A few small vents were all that remained; one, near the north side, eventually built up a cinder cone, now called Wizard Island. 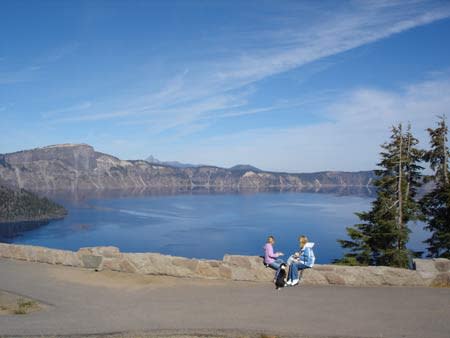 Mrs. BA, the Little Astronomer, and Canes Minor at Crater Lake. The far rim is 10 kilometers away. All images here are taken by me (except for the last one, obviously), and clicking them will take you to much larger (~800 kb) images on Flickr 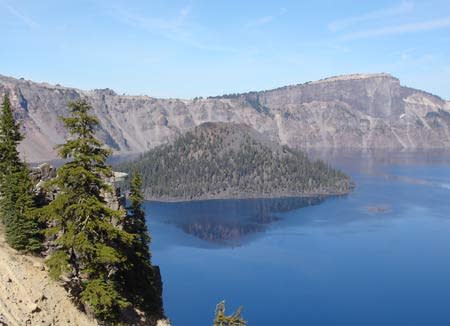 Note the word "island". Once the volcano cooled, it formed a vast crater 10 kilometers across. Remember, the Pacific northwest is rainy. Over hundreds of years, water filled the basin left by the catastrophe. Some evaporated, of course, and some seeped away through cracks in the rock. But sources outweighed sinks, and the crater slowly filled with trillions of liters of water. Today, seven millennia after the explosion, the water stays at a constant amount. The rim stands hundreds of meters above a lake of unbelievable, fantastic, crystal-perfect cerulean blue. When calm, the water reflects so well that the far rim is difficult to distinguish from the water (see the image at the top for an example of this... bear in mind the far wall is 10 kilometers, or six miles, away). 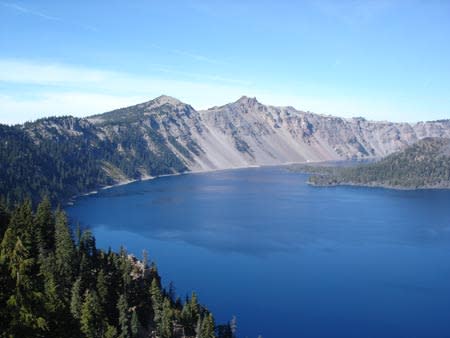 The water is deep; at 600 meters (2000 feet) Crater Lake is the 7th deepest lake in the world, and by far the deepest in the continental US. The deep blue comes from the water absorbing all the reds, yellows, and greens from sunlight, leaving only the blue to come back to your eye. The blue color is a natural relaxant, and the calm of the mountaintop was like a physical thing. There were birds, and people, and wind, of course, but the sheer historical and massive inertia of it was like a blanket on my chest. But echoes of the violence of the event, so many years ago, came back again and again, hinted in the rim wall. Landslides covered the north wall, where once a pyroclastic flow of immense fury stormed out. 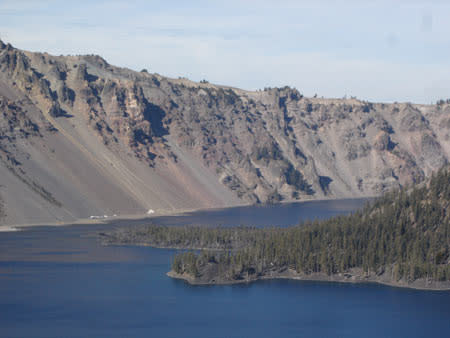 At the bottom, just barely resolved by the eye, were huge lumps of a white materials. Crushed by the sense of scale, Mrs. BA ventured that they were tree trunks, but then it became clear these white deposits were enormous, far larger than any trees. What were they? I still don't know. We walked around the rim, listening to the wind and the birds, marveling at neon yellow fungus growing in the pines, kicking pumice chips left over from the explosion. We thrilled to look down over nearly sheer drops, hundreds of meters down to the water. Watching tiny white dots of birds circling over the lake surface sent my stomach into little frissons, shivers from an atavistic fear of falling. Eventually we reached the end of the trail, and so we turned around and walked back to the car. The trip was over. Driving once again down the side of the mountain was sad, a little, but also thrilling. How many people live their entire lives without ever seeing such a thing, or even suspecting it existed? How many, even if they saw it, don't even glimpse the immense history of the place? Remember earlier, when I said that even after viewing the lake, incredibly, things got better? It was when I went into the room in the overlook, the one that had the small museum about the volcano. Inside was a large screen television that cycled through the geology of the region over and over again, reliving the millions of years of history, the massive and apocalyptic eruption that must have killed every living thing for hundreds of square kilometers, all those millennia ago. I watched it too, but then stood back and watched the watchers, seeing their eyes light up, their jaws drop, their stunned silence. They got it. They saw it. They knew. Knowing is always better. You can be overwhelmed by nature, frightened of it. There are forces of appalling devastation, capable of smashing everything humanity has ever made into dust. 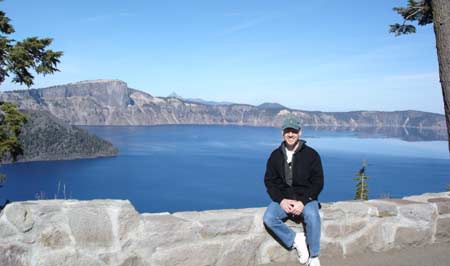 The lake in the crater is beauty on a scale that is difficult to convey. But staring out over the lake, seeing the history literally carved into the walls... it brought a lump to my throat. I am continually and perpetually struck by nature's hand, which uses unimaginable violence and forces almost beyond reckoning to sculpt delicate and subtle beauty. Knowing that made the lake more profound, more beautiful, and gave it more depth than merely seeing it could possibly have done. Knowing is always better.