Thank you Karen! Glad you're back safe. 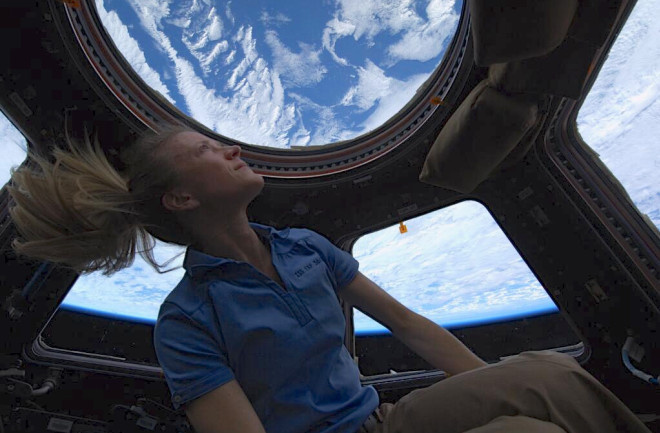 Astronaut Karen N. Nyberg gazes at Earth from the cupola of the International Space Station shortly before her return to Earth. (Photo: NASA) Karen Nyberg sure got around during her 166 days in space. She traveled 70.3 million miles while orbiting the Earth more than 2,600 times. Along the way took some spectacular photos of the home planet and Tweeted them so we could all enjoy her unique perspective from the International Space Station. This was one of her last ones before returning to Earth aboard a Soyuz spacecraft on Nov. 11 (Kazakh time, Nov. 10 in the U.S.):

Karen Nyberg's last sunrise photo from the International Space Station before returning home. (Photo: Karen N. Nyberg/NASA) As a native-born Brooklynite, here's one of my faves:

New York City glitters in this photo taken in September, 2013 from the International Space Station. (Photo: Karen N. Nyberg/NASA) I breathed a sigh of relief when I saw that Nyberg and two crewmembers touched down safely in Kazahkstan. Here she is in a photo Tweeted by NASA shortly after being carried from the Soyuz capsule and wrapped in blankets to ward off temperatures in the 20s: https://twitter.com/NASA/status/399739312549277696 Welcome home Karen.