TESS Spots an Exocomet Around One of the Brightest Stars 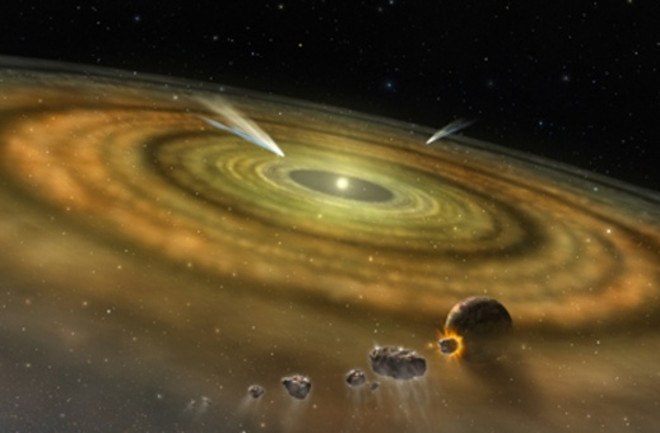 Astronomers have found clear observational evidence of an exocomet around the bright star Beta Pictoris, located some 65 light-years from Earth. At just 20 million years old, Beta Pictoris is relatively young, meaning it's still surrounded by a disk of gas and dust known as a protoplantary disk, seen here in this artist's concept.(Credit: NASA/FUSE/Lynette Cook) The planet-hunting TESS telescope has big shoes to fill — shoes that once belonged to Kepler. Before its retirement last October, the pioneering Kepler Space Telescope spent 10 years paving the way for the search for planets (and possibly life) outside the solar system. Of the nearly 4,000 exoplanets found around other stars to date, Kepler found more than half. But now, TESS is up to bat. And it's already off to a great start. Over the next two years, TESS is expected to find roughly 20,000 new exoplanets hiding in the glow of the sky's brightest stars. Additionally, according to NASA's exoplanet exploration website, "TESS will discover dozens of Earth-sized planets and up to 500 planets less than twice the size of Earth." But what about the even smaller stuff? For instance, exocomets. Well, don't fret. TESS can find those too. According to a new study, astronomers have detected an exocomet passing in front of one of the sky's brightest stars, Beta Pictoris, located some 65 light-years away. Although other exocomets (and an exoplanet) have been detected around Beta Pic before, this is the first time astronomers have found a comet around the star using a light curve from TESS. "Other astronomers have seen hints of exocomets towards Beta Pic and other stars using an instrument called a spectrograph," Leiden University astronomer and co-author Matthew Kenworthy said in an interview with Science Alert. "But this light curve is very strong proof because it has the shape that was predicted by another astronomer 20 years ago. The light curve we see matches the computer model he made very well."

In order to detect faint objects (such as exoplanets and exocomets) around bright stars, many planet-hunting telescopes like Kepler and TESS rely on the transit method of detection. Basically, astronomers plot how the brightness of a star changes over time, creating what's called a light curve. If they see a dip in the star's light curve, they analyze how long and deep the dip is, which provides them with information about what's causing the star's temporary drop in brightness. When searching for exoplanets, astronomers look for symmetrically shaped dips that repeat over time. These indicate a symmetrical body, such as a spherical exoplanet, is orbiting in front of the star. Then, by analyzing the characteristics of the dips, researchers can tease out some of the exoplanet's properties, such as its mass and radius. However, when searching for exocomets, astronomers don't look for symmetrical dips in the light curve. They hope to see the star's brightness drop quickly at first, then take its time returning to a baseline level. This is because comets are not perfectly round. Instead, they leave an extended tail of dusty debris behind them. Like the cometary body itself, these tails also block light, so they leave an imprint on the light curve too. And since comet tails thin out the farther you get from the comet itself, less and less light is blocked over time. In other words, the light-curve signature of a comet has a dramatic initial dip, followed by a tapered return to normal.

Above are the light curves from three possible exocomet transits in front of the bright, young star Beta Pictoris. The signal on the far right is the strongest and aligns with what researchers expect from an evaporating comet with an extended tail passing in front of the star. Note how the star's brightness dramatically dips at first, but then slowly returns to its baseline. (Credit: Zieba et al., arXiv, 2019)

Astronomers discovered the new exocomet around Beta Pic using data collected by TESS (the Transiting Exoplanet Survey Satellite) between October 19, 2018 and February 1, 2019. Although it's difficult to determine many of the comet's characteristics because its orbital trajectory and composition are not well constrained, according to the study, if we assume it orbits at about 1 astronomical unit (an AU is the average Earth-sun distance), then the comet's tail extends some 124 million miles (200 million kilometers) behind it. That means the comet's tail is about 1.3 AUs long. With this newly discovered comet comes proof the TESS is well-suited for detecting such objects around young, bright stars. So moving forward, astronomers hope to utilize TESS to bolster the number of known exocomets, which will help them determine exactly how common these objects are in other systems. Currently, it's thought that the disk of gas and dust around young stars (like Beta Pic, which is only about 20 million years old) should be primo locations for comets, as comets are believed to be the building blocks leftover from planetary formation. In fact, a 2014 study found spectroscopic evidence for thousands of exocomets in the Beta Pic system. But if researchers find that other young stars don't seem to have as many exocomets as we expect, then we may be missing something rather important in our theories of planetary formation. Only time (and TESS) will tell. The new research, titled "A transiting exocomet detected in broadband light by TESS in the Beta Pictoris System," has been accepted for publication in the journal Astronomy & Astrophysics and is available for review on the preprint website arXiv.