Black holes are weird. Well, duh, right? But they do something that surprises most people: besides hoovering down almost everything nearby, they can also eject material as well. And by eject, I mean send it out screaming at nearly the speed of light and heated to a bazillion degrees. 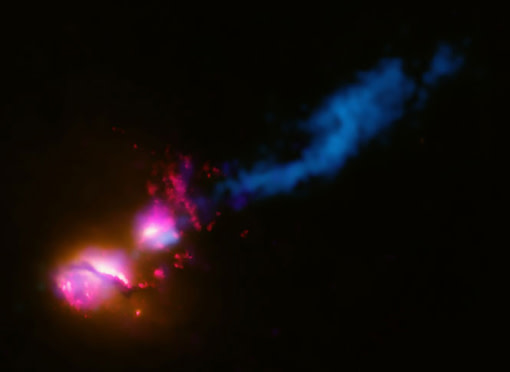 The image above is from the Chandra X-Ray Observatory, and it's all about this scary scenario. Let's take a walk down the gravity well, shall we? Basically, as matter swirls down into the maw of the hole, it forms a flattened disk called an accretion disk. Friction, magnetism, and other forces heat the disk up. A lot. At the poles of the disk, all this heat and force can focus twin beams of fury, jets of matter and energy of unbelievable violence. Every galaxy has a supermassive black hole in its core, and if these black holes are actively feeding, they can emit these beams. They can be so energetic that these galaxies, called Active Galaxies, are among the brightest objects in the entire Universe! As you can imagine, it sucks to be in the path of that beam. All that high-energy radiation pelting you, even from thousands of light years away, can be enough to do some serious hurt. Enter 3C321. This object is actually two galaxies. Both have active black holes in their cores, but one of the two is creating these death ray beams... and the other galaxy is in the way. The picture from Chandra shows this drama unfolding. The beams are coming from the lower left, where the more active galaxy sits. The orange and red colors (from Hubble) represent optical and ultraviolet light emitted by the galaxy. This generally indicates regions where stars are being born; it appears as if the beams from the black hole are compressing gas in the galaxy, collapsing it, and aiding it in forming stars. Purple represents high-energy X-rays (seen by Chandra), caused by all sorts of events, but quite a bit is from the beam slamming into material in the galaxy itself. The blue is lower energy radio emission. Radio waves (detected by MERLIN) are also generated when the beam hits the other galaxy in the upper right. You can see how the beam gets distorted as it rams into the gas in the other galaxy. The two galaxies are only 20,000 light years apart (for comparison, our Milky Way Galaxy is 100,000 light years across), so the galaxy in the upper right is enduring a world universe of hurt. Any planets in the path of that beam are being pummeled by all manners of radiation. It's not easy to know if that would make them uninhabitable, but it seems likely; the beams would interact with the air and destroy most of the molecules in the upper atmosphere. Ozone is very susceptible to this, and it's our ozone layer that protects us from damaging ultraviolet light from the Sun. Without it, the krill and other sea life making up the base of the food chain on our planet would die. That would be, to use a scientific word, a bummer. By studying the interaction of the beam from the one galaxy with the other, astronomers can learn just what sorts of things happen when galaxies go bad. And while this seems far removed from our everyday life, I have to add that there is a supermassive black hole in the center of our Galaxy. It's not currently active, and to be honest there's no indication that the beams would be aimed at us that even if it were to start chomping down on gas clouds and stars; most likely they would be aimed up and out of the Galaxy, very far from where we are. Still, forewarned is forearmed. The more we know about this stuff, the better I feel. Plus, geez, it's just so cool! Too bad they didn't release this image before I chose my Top Ten images of the year. And, finally, I'll note that I talk about this (as well as black holes in general, and other kinds of killer beams) in "Death from the Skies!" It'll be a few more months before it's out, but if you like destruction writ large, you'll have fun reading the book.