Taking the Temperature and Pressure of Magma 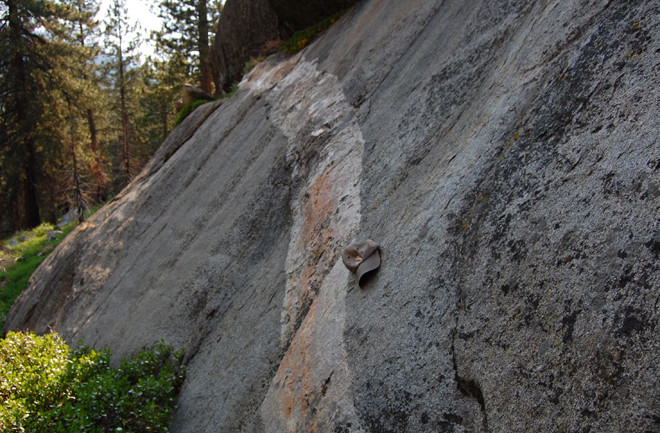 An outcrop of the Eagle Lake pluton in the Sierra Nevada of California with an aplite dike cutting across the pluton. How exactly can you determine the pressure and temperature that this magma formed? Image by Erik Klemetti, July 2010. Today I'm off to sunny UC Davis with my summer research student to start on her analyses of some lovely plutonic rocks from the Sierra Nevada of California. For the last few years at least, my research has focussed on time - what are the ages of the crystals in magmas - and even more specifically, in magmas that erupted. The work that my student is doing is different as she'll be looking at conditions rather than time - that is to say, what pressures and temperatures did the crystals in a magma form. Her rocks are plutonic as well, rather than volcanic, so they cooled underground rather than erupting to the surface. Of course, by the time we can sample them, they are at the surface, so understanding what were the conditions of formation for the now solid and exposed rocks, we need to do a little sleuthing by examining the crystals and their compositions. The game of determining pressures and temperatures of crystal formation in a magma comes down to one thing: chemical equilibrium. The basis of most petrologic geobarometry and geothermometry is that minerals will form with different compositions at different pressure and temperature conditions. Sometimes they will react when exposed to a new pressure and temperature conditions. Sometimes two minerals will control the composition of each other as they form at specific pressure and temperature compositions. The key is that if we can understand how the thermodynamics of why minerals form with certain compositions and what controls those compositional changes, then we can calculate a pressure and/or temperature for that crystal. Now, this can be tricky. You could think of this as attempting to determine the temperature you baked a loaf of bread by examining the ingredients after the bread is baked. Remember, you don't have the recipe and you're looking at the bread days after it baked. All the information you have are some experiments you've run where you've looked at how flour, yeast and water react at different temperatures (but not necessarily making the same bread). You might also have some theoretical models for how sugar behaves with water present at high temperatures. You might not have the experimental data that exactly match the temperature and pressure that bread was baked, but using the theoretical framework of the bread's thermodynamic properties, you can extrapolate the pressure and temperature of your bread with some level of uncertainty due to the models - that loaf might have baked at 350°F (175°C) ± 20°F (7°C) at ~0.01 kbars (± 0.05 bars). Magmas are somewhat similar in that we can look at the ingredients - the crystals in the magma - and start to look at the conditions of formation at different pressures and temperatures. Many times, crystals will slightly change their composition as pressure and temperature change. For example, the titanium composition of quartz will vary as temperature changes, or the aluminum content of hornblende amphibole will vary as pressure changes. Sometimes you look at two minerals exchanging elements as conditions change, such as the relation between magnetite and ilmenite, were iron and titanium (with some other elements) vary at different temperatures, but the two minerals change compositions in concert. By analyzing the composition of minerals where we have developed robust experimental and theoretical frameworks for their compositional changes due to pressure and temperature, we can calculate those conditions for populations of crystals - and hopefully the magma. There are always complications. What if the crystals in a magma didn't form at the same time? If the quartz in your granite formed long after your amphibole, you'll be matching temperatures with pressures that didn't coexist, so your magma might seem cool. What if the crystals reequilibrate after forming - sometimes magmas can reheat with new intrusions, so it can be difficult to definitely say the temperature is the magmatic temperature and not reheating. Many of these barometers and thermometers require many other minerals to be present in the magma to attest to the equilibrium conditions, but many times you can't find all of them, so you just need to forge on, admit that the conditions might not be equilibrium and apply appropriate errors values to your data. The long and short here is that, as with much science, you have to make decisions about your data and its validity, you have to document where the data works and where it doesn't and you need to be aware that the pressures and temperatures you get are like approximations and not set in stone (so to speak). One way to help with this uncertainty is to use multiple barometers and thermometers. My student will be using 3 different barometers and 3 different thermometers on these rocks to see how they agree or disagree. The more overlap you get, the more likely your pressures and temperatures reflect the real conditions of formation for that magma. If they don't overlap, then you need to start thinking about whether some minerals are not in equilibrium with others, so they might have been recycled from an older intrusion or plucked off the walls of the magma chamber. Even if your data doesn't give you a specific set of conditions, it can still be useful in understanding the complex sources of crystals. These data from the Sierra Nevada will be used to examine the emplacement of the Mineral King pendant - the home of the rhyolite calderas I've been working on with colleagues for the past few years. The pressures and temperatures will be the first for this pluton, so my student will be finding out something brand new about a piece of the Sierra Nevada - and I think that is really cool ... and that is what keeps us going in this game, the thrill of new discoveries.