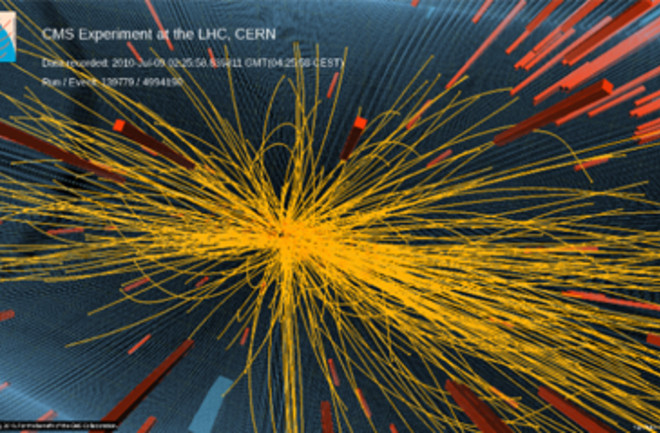 If there was a race to see which Large Hadron Collider experiment would provide the first surprise, and the first giddy claims of possible "new physics," it appears the Compact Muon Solenoid (CMS) has won. CERN scientists announced this week that the most high-energy proton smash-ups produced an weird effect: particles created in the collision were somehow linked together and flew off in an unexpected direction.

In the new experiment, the CMS team took data on the charged particles produced in hundreds of thousands of collisions. The team observed the angles the particles’ paths took with respect to each other, and calculated something called a “correlation function” to determine how intimately the particles are linked after they separate. The plot of the data ends up looking like a topographical map of a mountain surrounded by lowlands and a long ridge behind it (see below). [Wired.com]

Based on models of these collisions, you'd expect to see the big single spike, as well as the longer ridge opposite it. The spike comes from a stream of particles scattering off in one direction after a collision; the large ridge opposite shows up because "you have to have something there to balance energy and momentum," the Guardian's Jon Butterworth says

. (If you're having trouble visualizing what this map means, Butterworth says, imagine it as the cylindrical tube in which the particle collisions take place, but cut open lengthwise and unrolled, with the pairs of linked particles plotted out.) The trouble is that small ridge in the bottom right, where the arrow is pointing. That little guy is not supposed to be there.

This shows particles and energy coming out far away from the jet in rapidity (meaning at angles along the LHC beam) but on the same side of it around the cylinder. Our best models of quark and gluon interactions and jet production do not predict such an effect. [The Guardian]

Thus, the map shows linked particles shooting off in a particular (and unexpected) direction. So what? The LHC scientists spent the summer going over and over the data to make sure the ridge wasn't a mistake, but they're not sure yet. However, there are hints in other kinds of collisions:

It’s as if two particles somehow talked to each other when they were produced, the physicists said. This phenomenon has never been seen before in proton-proton collisions, though it resembles something seen at RHIC (the Relativistic Heavy Ion Collider) at Brookhaven National Laboratory in New York. That effect was interpreted to be from the creation of hot dense matter shortly after the collisions. [Wired.com]

Physicists thought the proton-proton collisions at LHC wouldn't be able to create that "hot soup," called a quark–gluon plasma. So if that's what we're seeing here, the find is a great sign that the world's favorite particle smasher might be full of surprises. Even the littlest findings could drop hints about the big questions the LHC is trying to answer, according to Brookhaven's Raju Venugopalan.

Venugopalan suggested that the new results could tell us something about the internal structure of the proton and the quantum fluctuations that occur there. These fluctuations are responsible for much of the proton's mass, and therefore a substantial portion of the mass of normal matter. ... relativity tells us that time slows to a crawl at speeds approaching that of light, so the accelerator essentially freezes whatever is going on inside a proton in place. In this sense, it acts like a giant flash bulb, capturing a single instant in the proton's quantum fluctuations. [Ars Technica]

on this find appears in The Journal of High-Energy Physics. Related Content: 80beats: LHC Sets a New Personal Record: 10,000 Particle Smash-Ups per Second

80beats: In the Universe’s Decisive Battle, Why Did Matter Prevail Over Antimatter?

DISCOVER: A Tumultuous Year at the LHC