The universe's biggest blasts take on a new dimension. 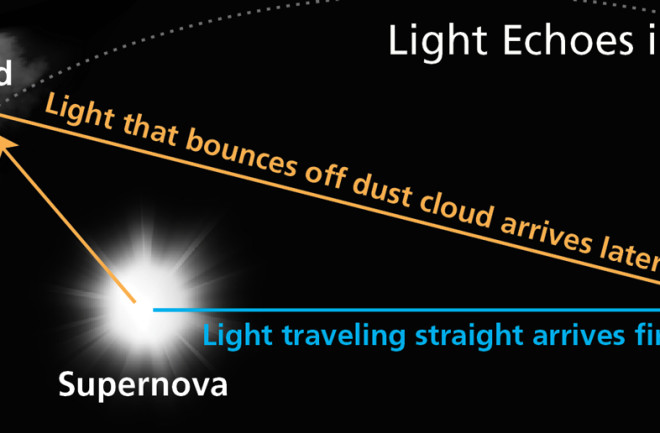 Light echoes (the wavy line) illuminate dust filaments from the 1572 Tycho supernova in the photos above, from December 2014 and September 2015. As light travels through them, it appears to move across the sky, away from the blast. | Courtesy Armin Rest

Astronomers are at nature’s whim. They study what they can see on the silk screen of the night sky, and must interpret that as a three-dimensional universe. Stars that appear next to each other on the sky’s visual plane could actually be hundreds of light-years apart along that hidden third dimension, depth. Astronomers have done their best to compensate, but sometimes they don’t succeed.

It’s been a particular challenge in understanding a specific kind of stellar explosion. For decades, astronomers treated the final bursts of tiny white dwarf stars known as type Ia supernovas like identical blasts, occurring the same way everywhere in the universe. Because of their identical intrinsic brightness, they earned the nickname “standard candles.” Scientists use them as a kind of mile marker for cosmology, measuring our universe’s expansion based on the explosion’s brightness: The dimmer it appears, the farther away it must be.

Unfortunately, over time astronomers have become increasingly unsure of themselves. More precise measurements from Hubble and other state-of-the-art scopes suggest these supernovas might not actually be identical — a suggestion that rocks cosmology’s foundations. To know for sure, astronomers needed to find some way to get a complete view of these stellar blasts to piece together exactly how past explosions happened. For years, no one knew how.

Then astronomer Armin Rest found a way. By studying the faint “light echoes” of a supernova’s blast bouncing off its dusty surroundings, he can re-create the full, three-dimensional explosion. As part of the Space Telescope Science Institute in Maryland, he leads one of the world’s few groups looking for the reverberations of ancient supernovas — those whose light hit Earth thousands of years ago. He’s already begun to understand them from multiple angles, and within the next few years, he hopes to bring a new depth to the night sky.

Rest fell in love with supernovas by accident, as a young researcher at the Cerro Tololo Inter-American Observatory in Chile. In the early 2000s, when looking for other objects in a nearby galaxy, he and his colleagues captured an image filled with the echoing light of three known supernovas. Once he realized what he was looking at, Rest was hooked. “I just grabbed that and ran with it,” he says. He has focused on exploding stars ever since.

Each supernova is the last gasp of a dying star. A type Ia supernova, the kind cosmologists thought always exploded identically, arises when a white dwarf — the leftovers of a sunlike star — gets too big for its britches. That happens if it has a companion star, as most stars in the galaxy do, and the white dwarf orbits it closely enough to steal material from it. The stolen matter makes the white dwarf bigger and more massive, and eventually it reaches a tipping point.

The white dwarf’s core, under intense pressure, undergoes a runaway chain of nuclear reactions. The process takes just seconds and produces an enormous amount of energy, too much for the dwarf to handle. It explodes as a supernova and spews the debris.

Since all type Ia supernovas are the result of a white dwarf breaching that critical tipping point, astronomers assumed they’d always produce an extremely similar blast. But it turns out white dwarfs can breach that tipping point in another situation: Instead of a giant star losing material to a white dwarf, two white dwarfs orbiting each other could slam together and explode.

Those different origins have visible consequences. If a type Ia supernova came from one white dwarf stealing material, astronomers expect the explosion would have sent the debris out at roughly the same speeds in all directions. But if the supernova came from two white dwarfs colliding, its debris would have shot out unevenly, with some material flying faster in one direction than another. And that asymmetrical blast could lead to different brightness levels, depending on the observer’s viewing angle. That asymmetry also could be hiding other possible variations.

Light echoes (the wavy line) illuminate dust filaments from the 1572 Tycho supernova in the photos above, from December 2014 and September 2015. As light travels through them, it appears to move across the sky, away from the blast. | Courtesy Armin Rest

“Even though [supernovas] have been used to map out the expansion of the universe and there was a Nobel Prize for it, we still don’t really know what the system is that’s exploding and how it gets triggered,” says Rest’s teammate Dan Kasen.

Rest’s work could clear all that up.

To determine the circumstances of a type Ia supernova’s birth, astronomers need to watch one happen up close to see how the debris moves and evolves. But nature hasn’t obliged. They’re rare events — more than 400 years have passed since the last one burst in our galaxy — and no one knows when the next will erupt. Instead of waiting around like a nervous dad in the delivery room, Rest found a way to zoom in on a few of our galaxy’s past supernovas.

Kepler’s Supernova is our galaxy’s most recent type Ia, but most of the light from its blast passed Earth centuries ago. A small amount of that light, however, stayed in the supernova’s immediate vicinity, bouncing off clumps of dust, or filaments. Eventually these filaments redirected the light our way. Rest hunts for these light echoes, seeking out a weakened, delayed signal nearly identical to the radiation from the original supernova.

Over the past three years, Rest has used the Dark Energy Camera on the 4-meter Victor Blanco Telescope in Chile to capture the sky around known blast sites from the past. He then subtracts each newer image from an older one; what’s left over could be the fading light echo from the original blast, a haze that moves farther away from the supernova site in each subtraction.

After analyzing its light echoes, Rest created a three-dimensional model (seen from different angles at left) of the supernova remnant Cassiopeia A, the debris that remains around a centuries-old stellar explosion roughly 11,000 light-years away. His model showed that it wasn’t a symmetrical blast (see arrows); different pieces moved at different relative speeds, revealing details about the circumstances behind the explosion. | Courtesy Armin Rest; Cassiopeia A by NASA/CXC/SAO

But that’s just the first step. Once he’s found a possible light echo, Rest’s team heads to one of the world’s largest optical telescopes, Keck or Gemini-North in Hawaii, or Chile’s Gemini-South, to get a more detailed image of its specific colors, called a spectrum.

Not only does Rest’s research provide that crucial close-up look, but it also gives astronomers a complete picture of the explosion — something they can’t get any other way. “Imagine two dust filaments, one at one side of the supernova, the other on the other side,” he explains. Each one sends different light beams toward Earth, where Rest can compare them and look for small differences to get a full perspective: “With light echoes, we can look at the same object from different directions.” And from that, the researchers can piece together all the details of the explosion.

So far, Rest has captured the echoes of five supernovas, two in the Milky Way and three more in the Large Magellanic Cloud, our galaxy’s nearest neighbor. The blast from one of the Milky Way supernovas, which Rest has seen from different angles, looks symmetric, suggesting it was the result of a white dwarf stealing from its companion until it exploded — a typical type Ia.

But one of the other supernovas Rest has studied tells a different story. Some of the delayed light he saw, from multiple angles of the blast, has shown that the explosion threw some material in one direction nearly 9 million mph faster than what spewed in another direction — information a two-dimensional view of the supernova remnant could never give up.

While Rest’s research is crucial for understanding stars and how they evolve, for cosmologists studying the expansion rate of the universe, research in two dimensions has been good enough. Even with all the variables in their origins, type Ia supernovas have still remained essentially the same brightness, and the basics of how they measure distance are unaltered. Rest’s work might help cosmologists refine their numbers, but they’re on the right track.

The universe was already known to be expanding, and farther blasts were fainter than expected, meaning they were moving away from us faster than we thought. The cause of this universal acceleration, dubbed dark energy, is one of the biggest mysteries in science. And to better understand dark energy, scientists need more details about type Ia supernovas, including the small variations in their light — exactly what Rest is working on.

With any luck, the long-lost light from our galaxy’s supernovas will bring more than simply the hidden third dimension into view.

[This article originally appeared in print as "The Full Picture."]