The death throes of nearby stars might have influenced evolution on Earth. 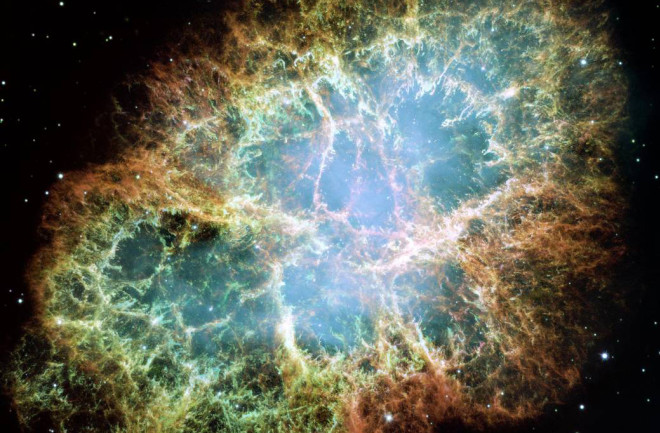 A nearby star went supernova in the year 1054 and created the Crab Nebula. But even closer supernovas could have changed history entirely. | NASA, ESA, J. Hester, A. Loll (ASU)

Humans have observed supernovas — the violent explosions that herald death for massive stars — for millennia. Now, using precise chemical measurements of seafloor rock and moon samples, scientists have shown that nearby supernovas rained down radioactive iron and potentially influenced life on Earth.

Anton Wallner of the Australian National University led a team that measured ^60Fe — a kind of iron ejected by supernovas — in sediment and rock samples from the bottom of the Indian, Pacific and Atlantic oceans. The team found that ^60Fe levels spiked some 40 times higher in seafloor material that was roughly 2 million years old, with another significant rise 7 million years ago. The researchers suspect each iron spike happened when the fallout from a supernova explosion hit Earth. Another team of researchers led by Leticia Fimiani of the Technical University of Munich also found ^60Fe in lunar soil samples collected by Apollo astronauts. Fimiani’s team suggests that the iron isotopes originated from the same supernova events.

Both supernovas occurred beyond the maximum distance, roughly 25 light-years, for a supernova to have catastrophic effects on life on Earth. However, even these distant explosions might have ionized the planet’s atmosphere and produced an uptick in the frequency of lightning. Similar supernovas almost certainly hit the early Earth. Lightning from these events might have assembled new chemical compounds from the atoms and molecules already present in the atmosphere, altering evolution.