The "shock breakout" captured in visible light for the first time. 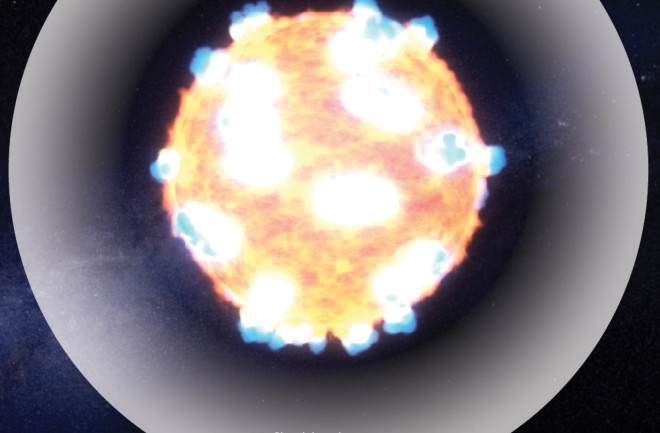 When a massive star dies, it explodes as a supernova, which includes a short burst of visible light, as in this illustration. Click to enlarge. | NASA Ames, STScI/G. Bacon.

For the first time, astronomers have captured in visible light an exploding star’s “shock breakout” — an extremely brief window into what triggers one type of supernova.

When a massive star runs out of fuel at the end of its life, it collapses and triggers a violent explosion known as a supernova. The entire process can take weeks to reach peak brightness. When the collapsing core reaches the star’s surface, it releases a burst of light, called a shock breakout, that lasts 20 minutes.

An international team announced the discovery in March after studying light from some 50 trillion stars captured by the planet-hunting Kepler spacecraft. The shock breakout occurred within the star KSN2011d, 1.2 billion light-years away and roughly 500 times the size of our sun.

The observation of such a brief event isn’t just a technical milestone; it also “demonstrates that the fundamental idea of core collapse supernovae is correct,” explains team leader Peter Garnavich.