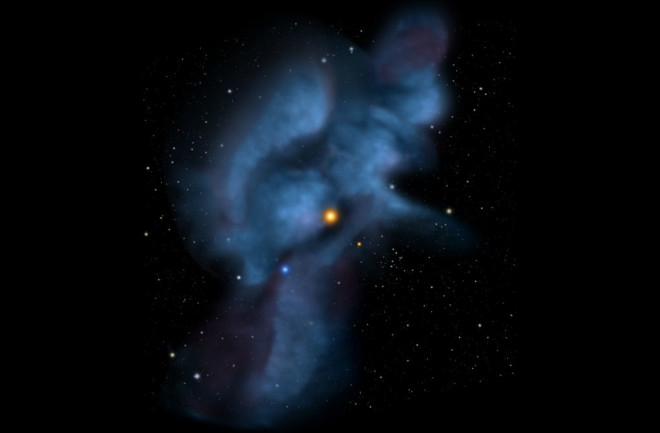 In this artist illustration, the sun (the yellow star at center) moves through a clump of interstellar gas that may still be raining down radioactive iron from a long-ago supernova explosion. (Credit: NASA/Goddard/Adler/U. Chicago/Wesleyan)

Antarctica is one of the most pristine places on the planet. Thanks to its generally inhospitable nature, as well as its natural isolation, it’s a good place for astronomers to search for meteorites and other materials that fall from the sky. They tend to sit undisturbed for long periods of time.

A team of astronomers from Germany and Austria recently made use of that preservation by collecting over 1,000 pounds of snow laid down in the past 20 years. After analyzing all the various dust and grains they found within the snow, they discovered a suspicious amount of iron-60. This particular radioactive strain of iron told astronomers that the dust wasn’t local, but instead came from outer space.

What’s more, they suspect it came from a supernova that exploded sometime in the recent cosmic past.

Our solar system sits in one particular spiral arm of the Milky Way, and it orbits the galactic center every 230 million years or so. Astronomers suspect that as the sun and Earth traversed the local galactic neighborhood, they would have plowed through the cloud of debris that this supernova left behind, causing the materials to rain down on Earth.

The same type of iron has been found buried in deep sea beds and other ancient rocks, but those were laid down millions of years ago. This is the first find of such interstellar iron laid down in recent years, and it could shed more light on exactly where and when the supernova that created the metal occurred.

The researchers published their findings August 12 in the journal Physical Review Letters.

To analyze the cosmic dust they were seeking, astronomers melted their 1,000 pounds of Antarctic snow. Then, they ran it through an instrument called a mass spectrometer to determine the precise chemical makeup of any materials caught inside. This told them not only that there was iron and manganese in the sample, but specifically iron-60 and manganese-53. These special isotopes, or varieties, of the elements have different numbers of particles in their nucleus than normal iron or manganese atoms (most iron is iron-56, and most manganese is manganese-55). Both are radioactive, meaning they’re not stable with that number of particles, and will at some point decay into other atoms – though for iron-60, it will take 2.6 million years for half of it to decay into something else, making it fairly long-lived for a radioisotope.

Once astronomers found the iron-60 and manganese-53, they had to figure out where it came from. Space was one option, but it’s actually quite common for that combination of elements to occur when cosmic rays strike the dust that fills the solar system. However, when that happens, there’s a particular ratio of iron to manganese scientists have come to expect, and that wasn’t the ratio researchers saw from the Antarctic snow – instead, they saw an excess of iron-60.

So they next tested to see if the extra iron might come from a more local source – fallout from nuclear weapons or power plants that might have drifted south. But further investigations showed that the amount of iron-60 scientists should expect from such sources is negligible, and can’t explain the amounts researchers measured.

Researchers have seen iron-60 like this before, in older rocks embedded in the seafloor or even on the moon. In those cases, they put it down to a long-ago supernova, a dying star whose explosion would have created all kinds of exotic elements, including iron-60. But knowing that the iron-60 is still falling to Earth today can help astronomers connect the long-ago iron fall to the one that’s probably still happening today, and figure out where and when the supernova occurred that created the iron in the first place.