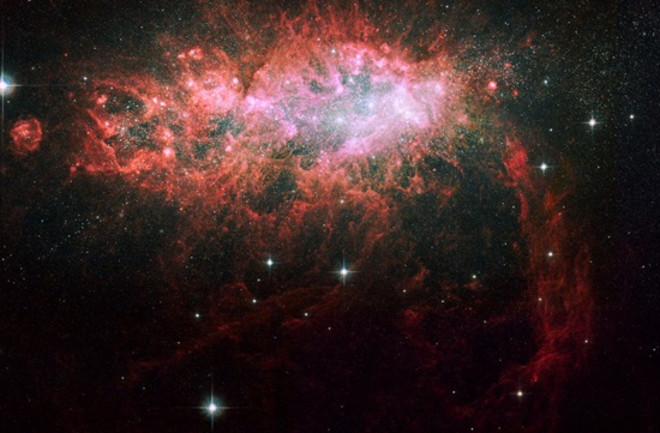 The dwarf irregular galaxy NGC 1569 is frantically forming stars. New research shows that some dwarf galaxies, however, have had their star formation halted by the supermassive black hole in their center. (Credit: HST/NASA/ESA)

Astronomers know that most galaxies house supermassive black holes in their centers, from the largest galaxies down to small dwarfs. They also know that when supermassive black holes are actively feeding, they can slow or even stop the formation of stars in their home. Although this relationship has been well established for large galaxies, it has not been studied much in dwarf galaxies. Now, researchers have discovered that black holes in dwarf galaxies are capable of shutting down star formation, just like their more massive counterparts.

The finding, published October 11 in The Astrophysical Journal, shows that winds of energetic gas and particles blasted out by supermassive black holes can stop star formation in dwarf galaxies.

When they are young, galaxies have a lot of available gas to form stars, which are birthed when the gas cools, contracts, and ultimately collapses into stars. But winds can stop star formation by either heating up the gas so it can’t cool and collapse, or by simply pushing the gas out of the galaxy entirely, removing the raw materials from which stars are born.

In larger galaxies, outflows from supermassive black holes have been linked to the shutdown of star formation. But not in dwarf galaxies.

“Typically, winds driven by stellar processes [such as supernovae] are common in dwarf galaxies and constitute the dominant process for regulating the amount of gas available in dwarf galaxies for forming stars,” said first author Christina M. Manzano-King at the University of California, Riverside, in a press release.

The winds are so strong that they push the gas out beyond the galaxy’s boundaries, making it unavailable to form stars.

How to Build a Big Galaxy

The finding has implications for our understanding of how galaxies form and grow. Over time, smaller galaxies combine to create bigger ones. So, dwarf galaxies still around today represent the building blocks of larger galaxies, giving astronomers a peek into their past. These dwarf galaxies are thus a crucial component of understanding how bigger galaxies assemble, and anything that affects their behavior, in turn, is important.

That “anything” now includes, it seems, their supermassive black holes. So, this finding is an important step toward building a better understanding of both dwarf galaxies and the larger galaxies they become a part of.