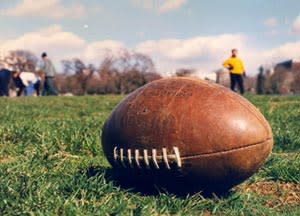 Today in America is our most revered holiday: the Superbowl. I am not particularly invested in either team -- I had to look up who's playing, to be honest -- but there is something about the game I like: science! Yes, science, of which there is plenty to be had during any sporting event. You just have to look for it. Last year, during the big game, I tweeted a series of science facts relating to football, and, when the game was over, collected them into a blog post. I thought it would be fun do it again -- this time, I'll use the hashtag #Sciperbowl -- but this year, instead of waiting to collect them, I'll simply update this post as I add them. That way you don't have to wait until the end of the game to see them all. So sit back on your recliner, keep one hand in a bag of chips and another on the refresh button. Let's see how to really enjoy this game! I'll start the tweets and start updating this post at the start of the game.

First Quarter 1) Realistically, a football is not a ball. It's more of a prolate spheroid

. 2) Football pads work by absorbing impact as well as spreading it out over a larger area. 3) Pads lower the force of impact by lengthening the time of the collision. 4) Pressure = Force/Area, so increasing the area of the impact reduces pressure and therefore injury. 5) Every time a football is thrown, it's briefly in orbit... but the Earth gets in the way.

Second Quarter NOTE: The following info uses air (not ground) speed and neglects air resistance. [Note: the math on these next ones can be found online, for example at the CSU San Bernadino website

Halftime 10) Halftime for the Universe was 6.86 billion years ago

travels 130,000 miles farther from the Sun. 21) Since the starting whistle, the Sun's moved 2 million miles in its orbit around the center of the galaxy.

That's it! And congrats to whichever team won!