Sulfur Dioxide from the Kliuchevskoi Eruption over the Midwest United States 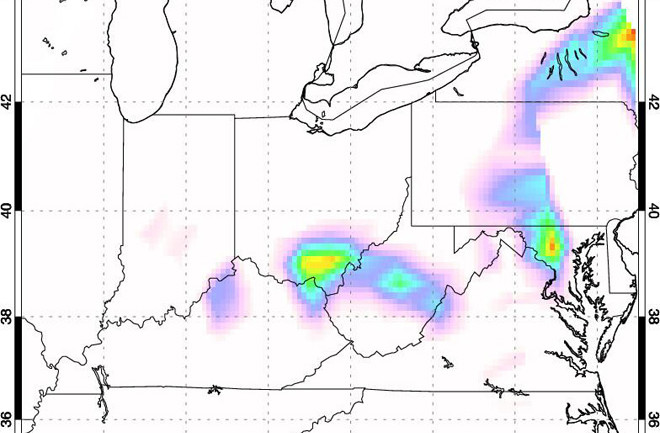 Sulfur dioxide plume from Kliuchevskoi over the midwest of North America. Image: NASA/Suomi via Simon Carn. I might be busy, but this was too cool to pass up. Simon Carn from MTU posted on Twitter an OMI sulfur dioxide map from Suomi NPP that captures the sulfur dioxide plume from the last week's eruption at Kliuchevskoi, but this plume isn't over Russia. The higher sulfur dioxide concentrations in the atmosphere have made their way halfway around the world in less than a week and are now over the middle of the United States. This image shows the plume over parts of Kentucky, Ohio, West Virginia, Maryland, Pennsylvania, New York and eastward. So, if you're in that part of the country, you can look up and know that somewhere above you are particles of sulfur dioxide from the eruption of Kliuchevskoi. Even a smaller eruption like this can put significant aerosols into the atmosphere that spread rapidly in the upper atmosphere, so it is easy to see how a large eruption could quickly cause atmospheric changes. Sulfur dioxide (converting to sulfuric acid droplets in the atmosphere) can heat the upper atmosphere by absorbing solar radiation and thus end up cooling the lower atmosphere by blocking that light. We live on a big planet (well, at human scales), but it is much smaller than it feels sometimes.