NASA just released this breath-taking picture of the Orbiter Endeavour, taken on May 28th, just a day before it undocked from the International Space Station and began to make its way to Earth: 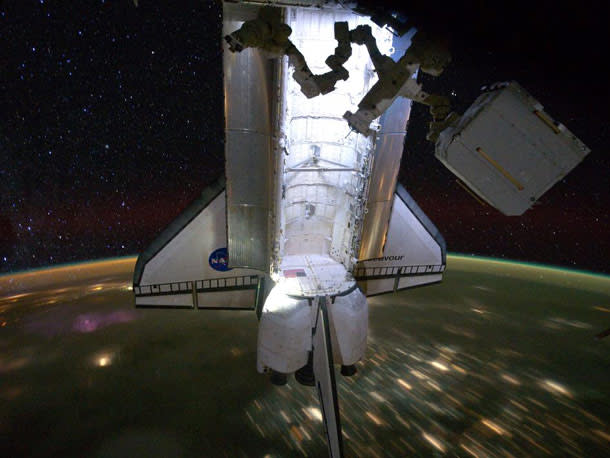 [Click to enshuttlenate.] Incredible. The exposure time was long enough to show city lights streaking under the station, and I suspect tracked on the stars long enough to make them clear and obvious. I can't identify the stars, but I think the southern dark nebula the Coal Sack can be seen on the left just above the limb of the Earth. I have no idea what cities we're seeing here -- don't get me started! -- but all together the elements here are simply and literally other worldly. Endeavour is due to land on June 1st at 02:32 EDT (06:32 UTC). Image credit: NASA

[UPDATE: Right after I posted this, NASA put up another incredible image of the Orbiter against the starry background. Amazing!]