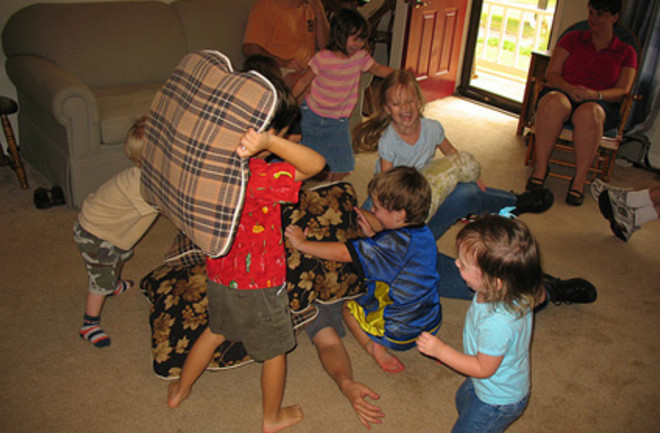 It's been a bad month for chemicals and masculinity. Last week 80beats covered the discomforting link found between the chemical bisphenol A (BPA), which is found in any number of consumer products, and erectile dysfunction. Now the villains are phthalates, chemicals used to make plastics softer and more flexible. A new study in the International Journal of Andrology has raised a storm of concern that prenatal exposure to these chemicals could make boys less masculine in their play preferences.

Phthalates, which block the activity of male hormones such as androgens, could be altering masculine brain development, according to Shanna H. Swan, a professor of obstetrics and gynecology at the University of Rochester Medical Center and lead author of the new report [Los Angeles Times]

. To test whether that link extended into behavior, Swan's team tested women for phthalate levels midway through their pregnancy and then checked back in on the children four to seven years later. The researchers asked parents to report their children's patterns of play, but they knew they also had to separate any potential phthalate effect from the "nuture " side of question.

To determine how parental views might sway behavior, parents completed a survey that included questions such as, "What would you do if you had a boy who preferred toys that girls usually play with?"

They were asked to respond with whether they would support or discourage such behavior, and how strongly

The study of about 150 kids found that while girls were mostly unaffected, boys who had been exposed to the highest phthalate levels showed a lower likelihood than other boys to participate in what we consider typical rough-and-tumble male recreation—play fighting, pretending to play with guns, and so on. But the research might not imply the national masculinity crisis that some headlines suggest.

Play in the most highly phthalate-exposed boys wasn’t “feminized,” Swan explains, since these kids didn’t preferentially play with dolls or don dresses. Rather, she says, “we’d describe their play as less masculine” [Science News]

. Rather than play-fighting, she says, those boys tended toward "gender neutral" play like putting puzzles together or competing in sports. Though these results will require lots of further study, chemical effects in the womb and on developing children can't be taken lightly. Last summer Congress followed the state of California's lead in banning some phthalates from children's toys, in response to the growing body of evidence that this class of chemicals cause harm. Phthalates still go into vinyl shower curtains, cables, flooring, and other plastic products. Unsurprisingly, the American Chemistry Council's phthalate senior director Steve Risotto came out swinging in response to the study, suggesting that Swan's team had scared mothers in the study into raising more effeminate boys. "The researchers biased the results by using mothers from their previous study," he said.

"These mothers may have had much higher levels of concern about their young boys' behavior, because Dr. Swan has repeatedly declared that phthalate exposure is reason for alarm" [Chicago Tribune]

. However, the mothers didn't know Swan was studying phthalates, nor did they know their own phthalate levels. So if worried mothering were the dominant cause of the "feminizing" the study noticed, then all the boys should have shown a predilection for less masculine play, not just those who'd been exposed to the highest phthalate amount in the womb. Related Content: DISCOVER: California Bans Phthalates in Plastic Toys DISCOVER: The Dirty Truth About Plastic 80beats: Study: The Chemical BPA, in High Doses, Causes Impotence 80beats: Chemicals That Warp Male Reproductive System Should Be Studied as a Group Discoblog: Is Your Halloween Costume Safe? (Ours Wasn't.)